Although I looked forward to visiting Eastern Europe last July, a trip to Budapest was one I dreaded and was completely scared of.  I had read so many horror stories about the place and to be honest, it scared the wits out of me.  On the eve of our visit to the Hungarian capital, I wondered why we even planned a trip to a place so dangerous and scary, just like many reviews by travelers to the place had written on the internet.  I was so ready to forego the trip altogether.  I was really scared of the Hungarians whom some travelers had described as scary looking, very dark skinned, dirty, con artists, etc.  Every one I saw at the Vienna train station looked suspicious to me on the outbound trip.

One travel writer even went as far as state that there were actually two types of travelers to Budapest.  Those who loved their stay and those who hated the place and couldn't wait to leave it.  I am very happy to say after visiting the city for three full days that I ended up being one who adored Budapest.  Marc and I enjoyed our stay so much we plan to return soon and even consider making it a base for our future trips given it's quite inexpensive there.

Of course, we were on guard all throughout our stay.  We steered clear of restaurants catering to tourists in Vaci Utca and we were back in the hotel by night time. Even if we wanted to stay up late, we just couldn't. After waking up around 8 in the morning and touring on foot the whole day, we were exhausted.

Upon arrival in Keleti Train Station from Vienna, Marc and I went to the information office to find out where the metro station was.  We were told to go out of the main exit doors and then turn left.  Sure enough, the subway station was just right next door.  We lined up to purchase our metro tickets.  I was quite surprised to see three ticket inspectors by the entrance to the station.  I previously thought that they just appeared unexpectedly, caught passengers, especially tourists with unvalidated tickets, and extorted bribes just like what I read from many travel reviews.

I was quite glad to see that the inspectors were out policing and weeding out passengers without tickets and with unvalidated tickets.  It gave the impression that the practice of inspecting tickets was in the up and up and not mere extortion.  Much to my chagrin, they were even polite.  Not the rude people they were previously portrayed as.  I had several encounters with them as we went in and out of major metro stations thorughout our stay in Budapest and all of them were courteous and respectful.  In fact, I particularly found the citizens of Budapest quite nice.  I guess we were lucky we did not get harassed or victimized by scam merchants.  I do hope to return to Hungary in the future and I hope my visits will  be as pleasant as the first one.

I took pictures of our hotel room in Budapest.  However, I wasn't able to take a picture of the facade.  Anyway, it was located on Raday Utca and the street is considered very hip and upscale in Budapest.  Lots of cafes and restaurants lined the street. 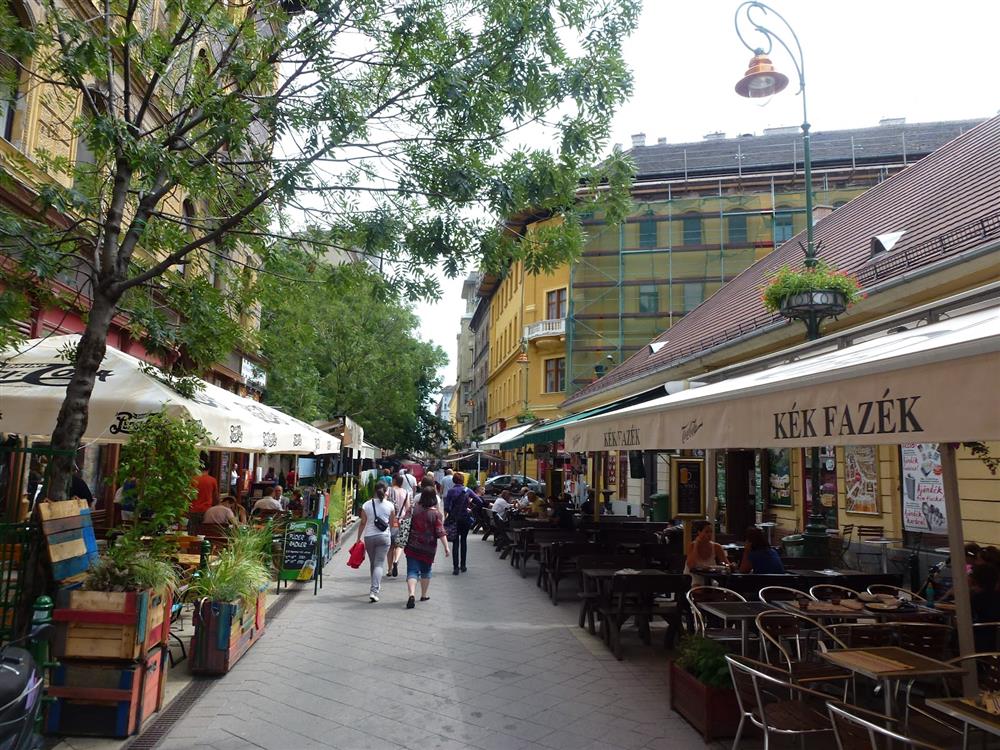 Raday Utca, the street where our IBIS Hotel was located

Raday Utca is where our IBIS Hotel was located and this is how it looked. Guide books consider this area very hip and upscale with the presence of restaurants catering to locals and tourists alike, galleries, and museums.  I must say, we lucked out by staying at the IBIS.  We couldn't ask for a more centrally located hotel at a truly superb price.

As soon as we left our bags in our hotel room, it was sightseeing for us right away.  It was the Central Market we got to visit first. It was just a block away from the hotel after all.  It was a nice place to stroll in.  I even saw one vendor selling pork rinds just liked the way they are cooked in the Philippines, Spain, and Latin America.  I wanted to buy some but with my ever growing tummy from all the sweet pastries I had eaten, I decided to pass. 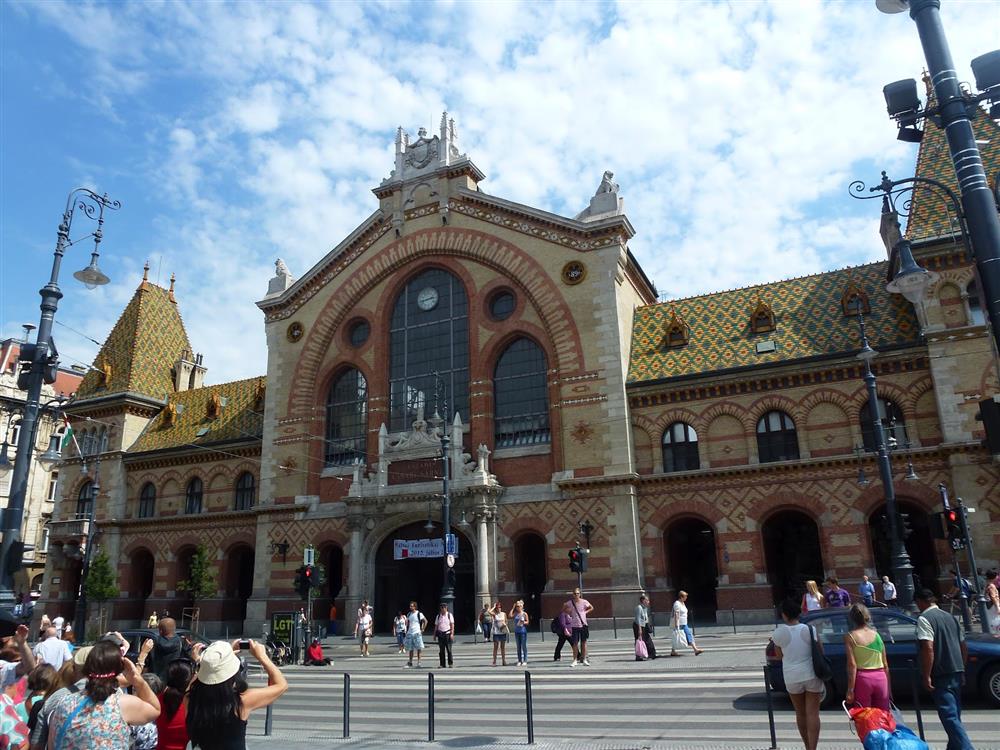 The Central Market of Budapest, a must see for all tourists in the Hungarian capital 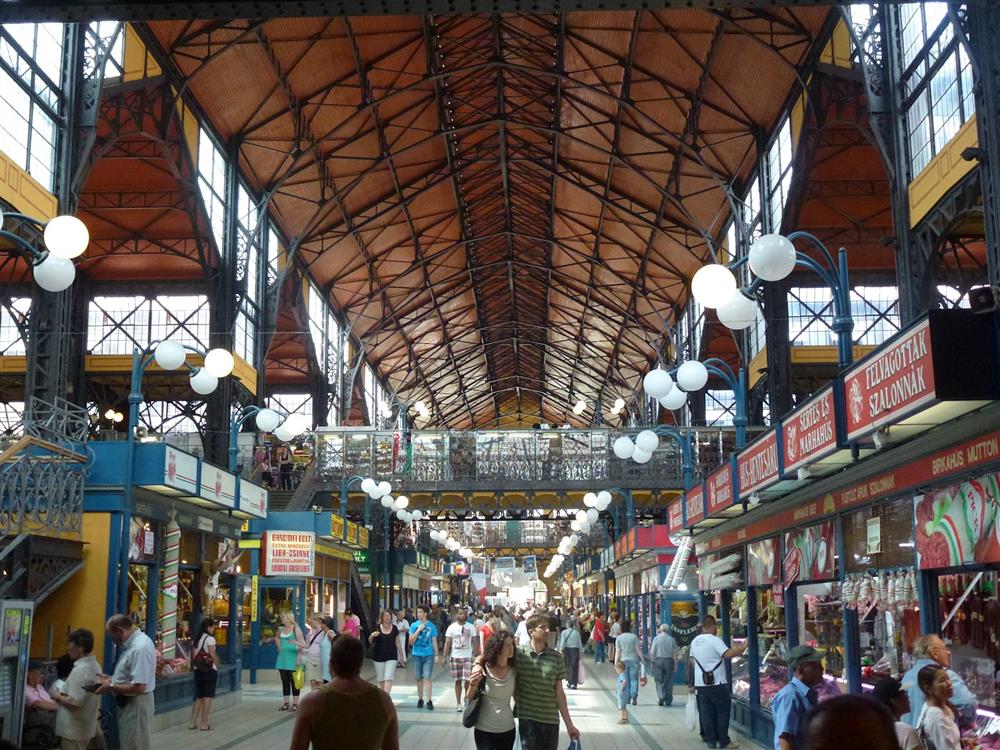 Inside the Central Market

Although locals come here to shop, this place is also heavily frequented by tourists.  Food stuff is sold on the first floor with souvenirs of all sorts are for sale on the second floor.  Guide books recommend that shopping be done here instead of the souvenir shops lining Vaci Utca.  Apparently, it is cheaper to buy trinkets like dolls, laced tablecloths, postcards, and the like here. 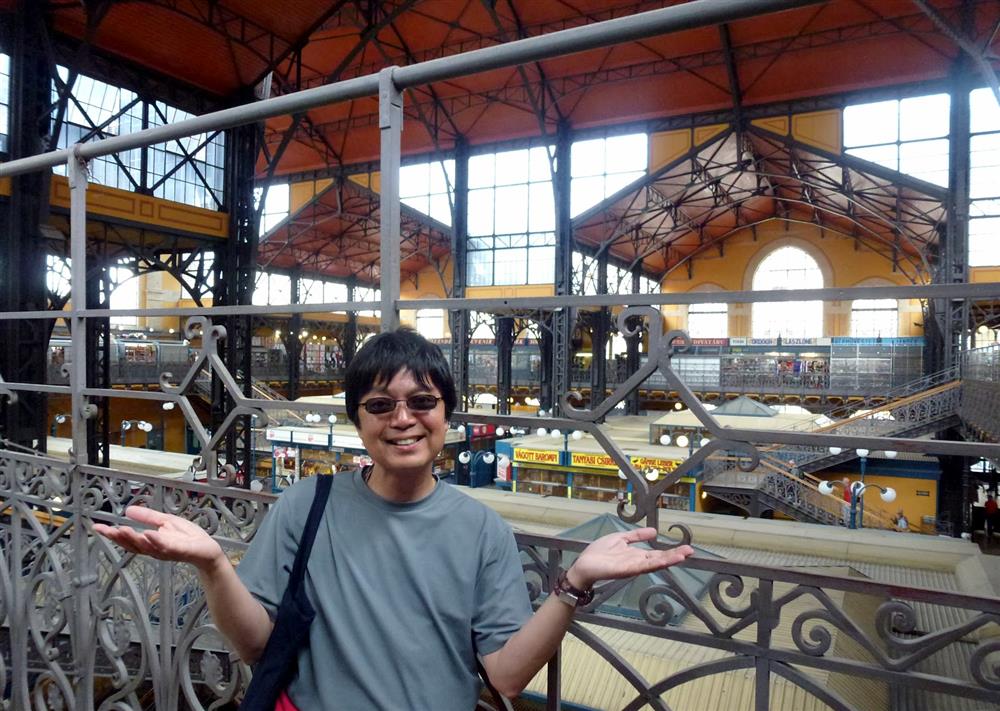 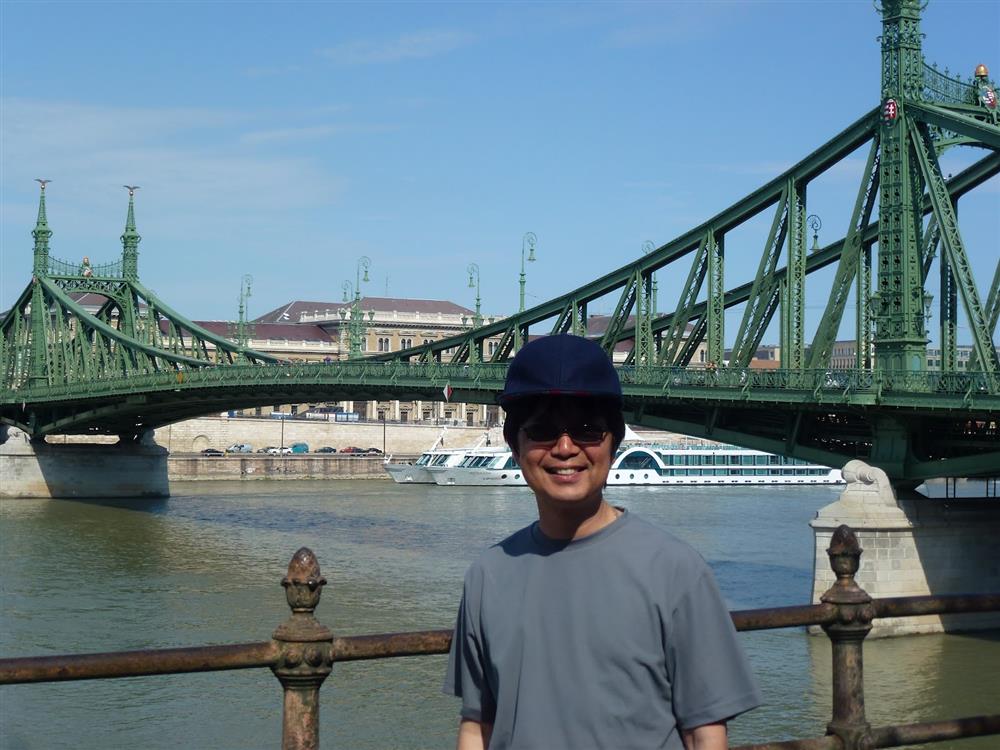 In front of the green colored Liberty Bridge 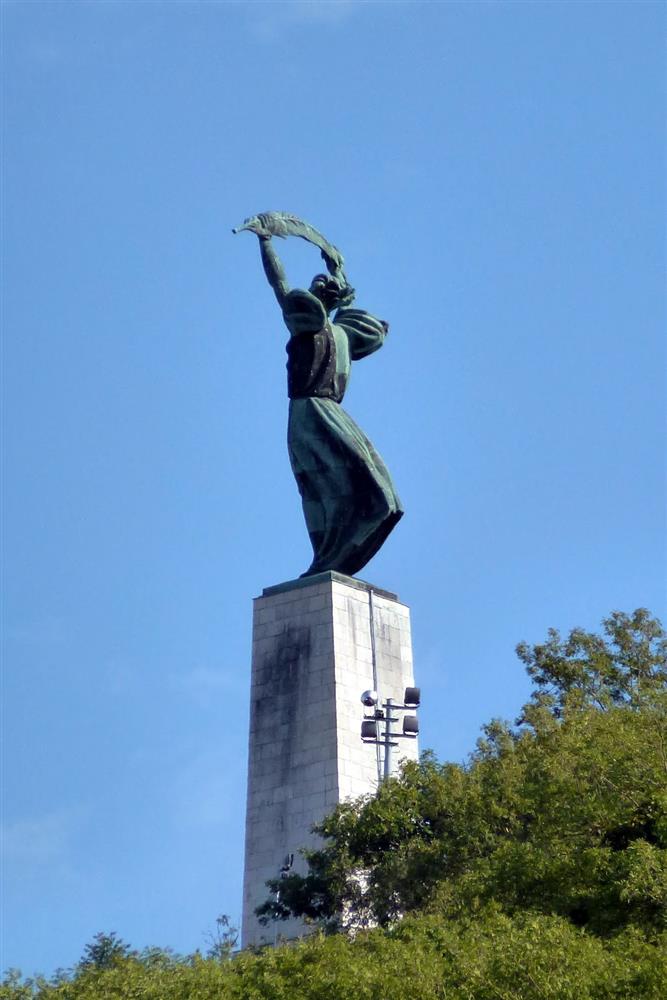 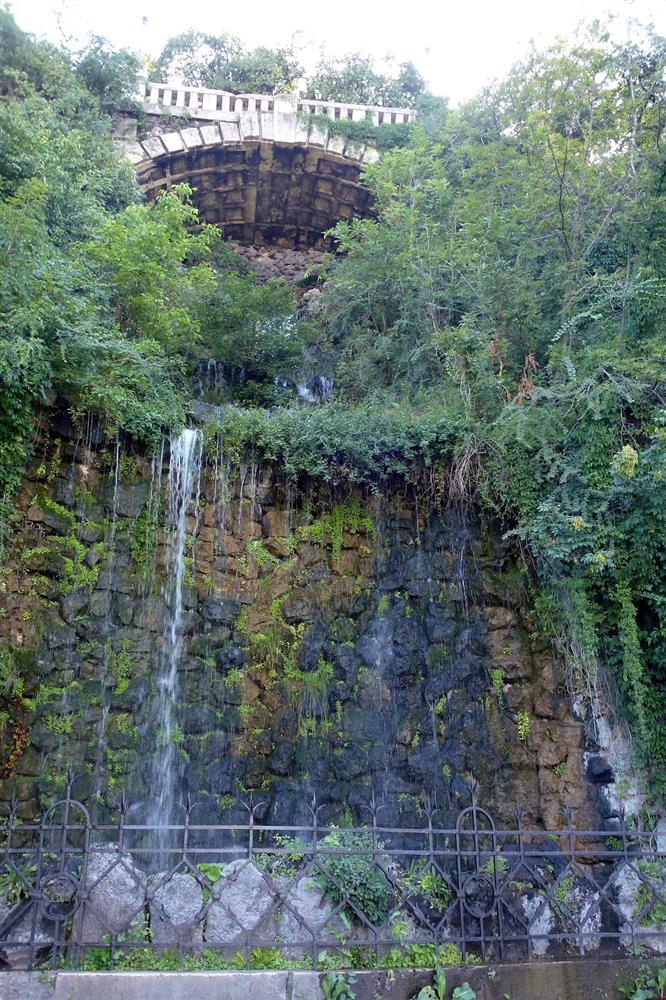 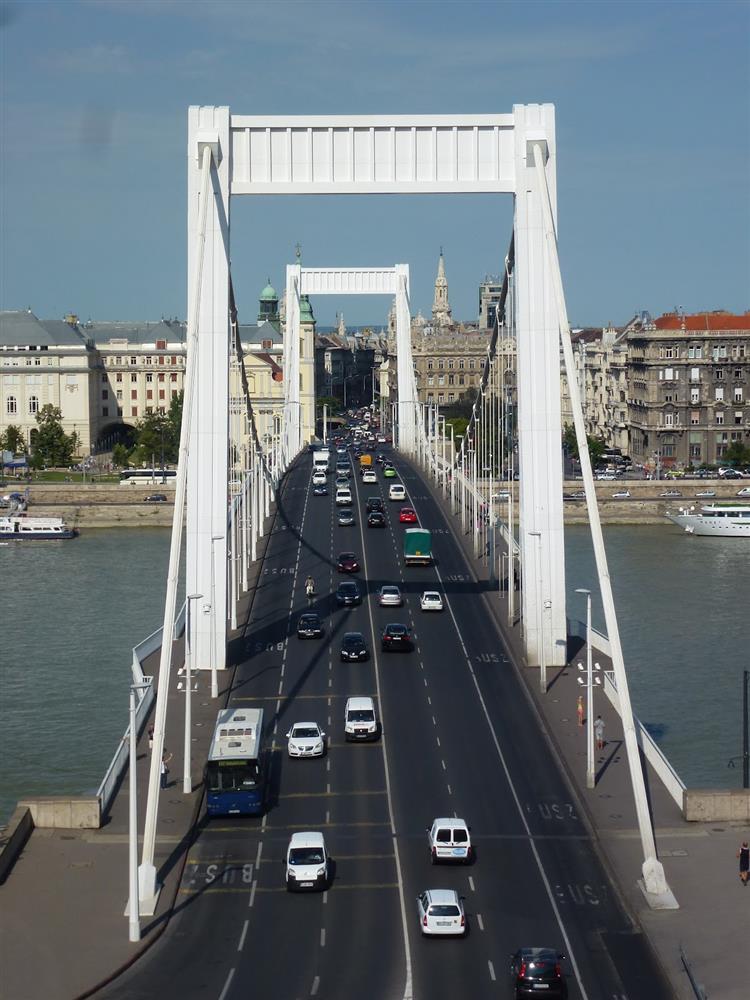 This white colored bridge is named the Elizabeth Bridge. Taken from atop Gellert Hill

We saw many bridges crossing the Danube River in Budapest. 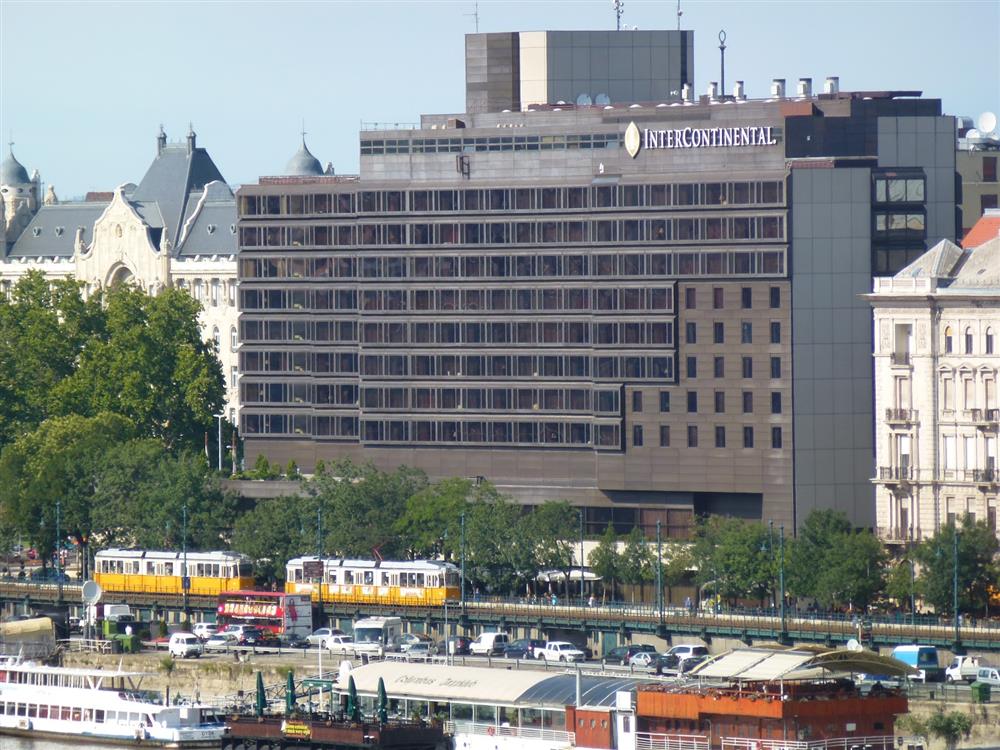 The Intercontinental Hotel by the River Danube 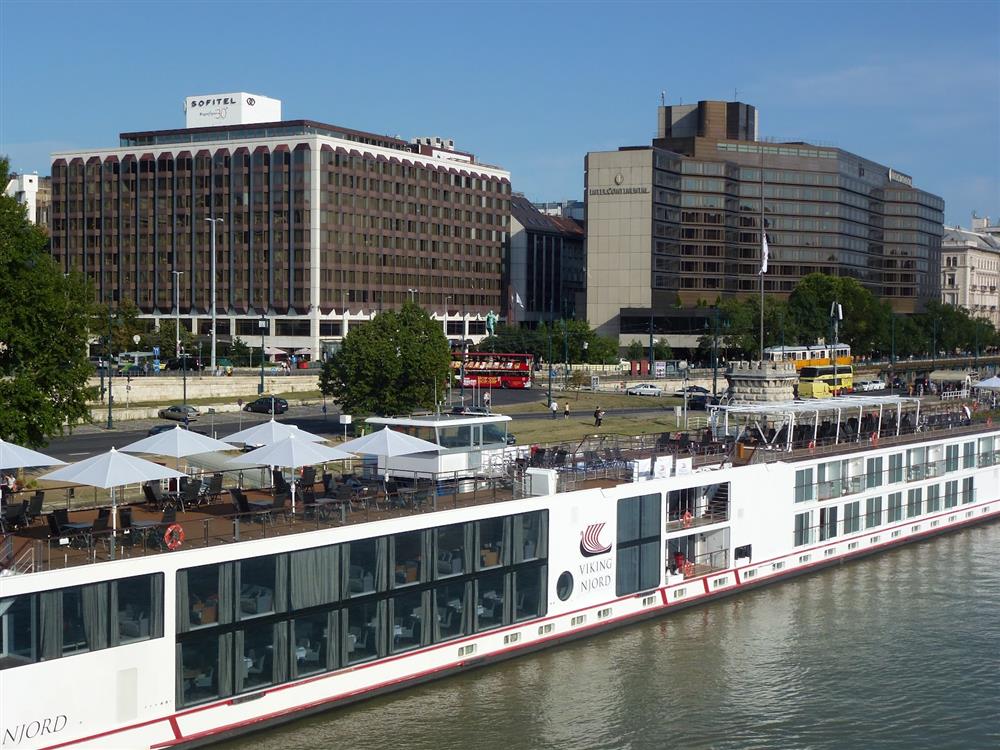 The Sofitel and the Intercontinental Hotel. The vessel in the foreground was the Viking Cruise ship. 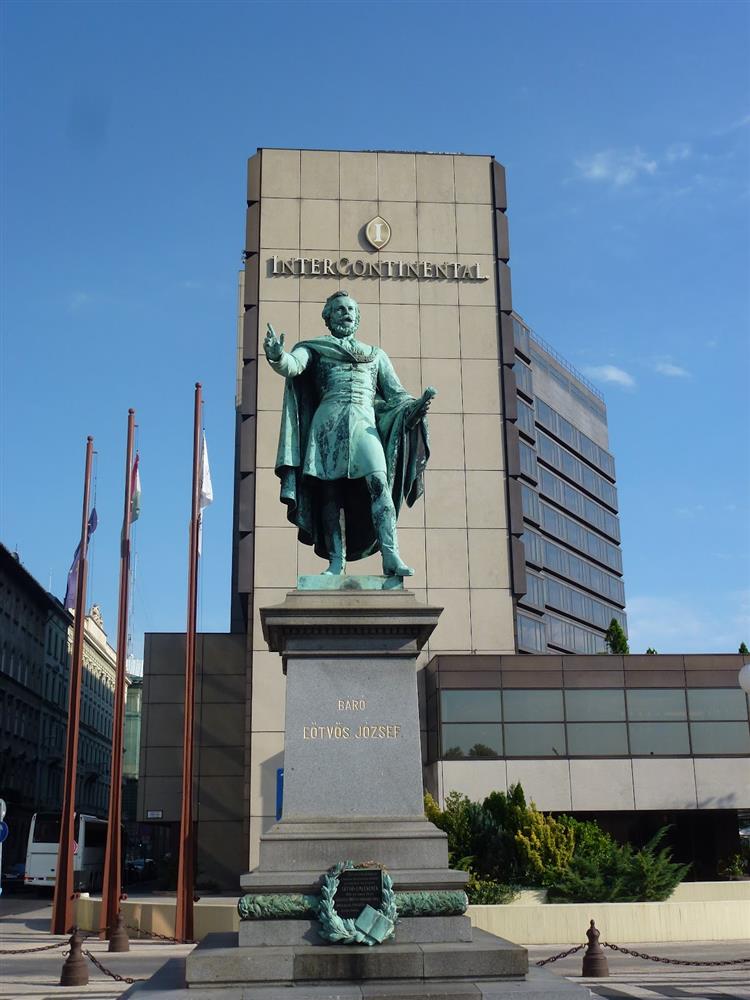 The monument dedicated to Eotvos Jozsef in front of the Intercontinental Hotel. 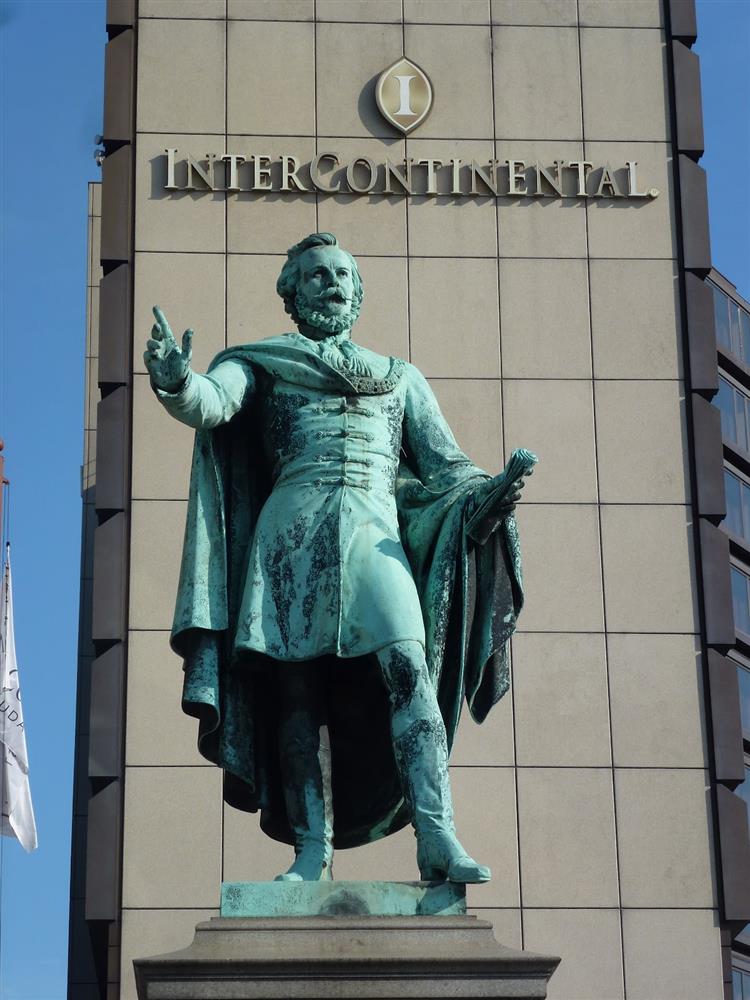 A closer view of the statue of Eotvos Jozsef, a Hungarian writer and statesmen in front of the Intercontinental Hotel 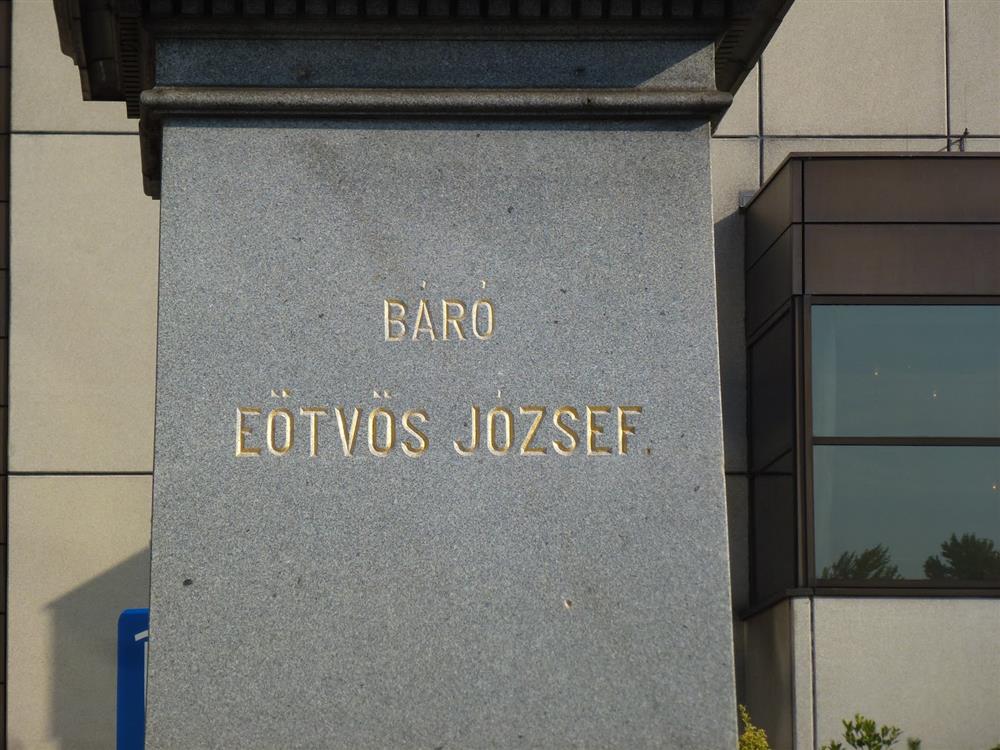 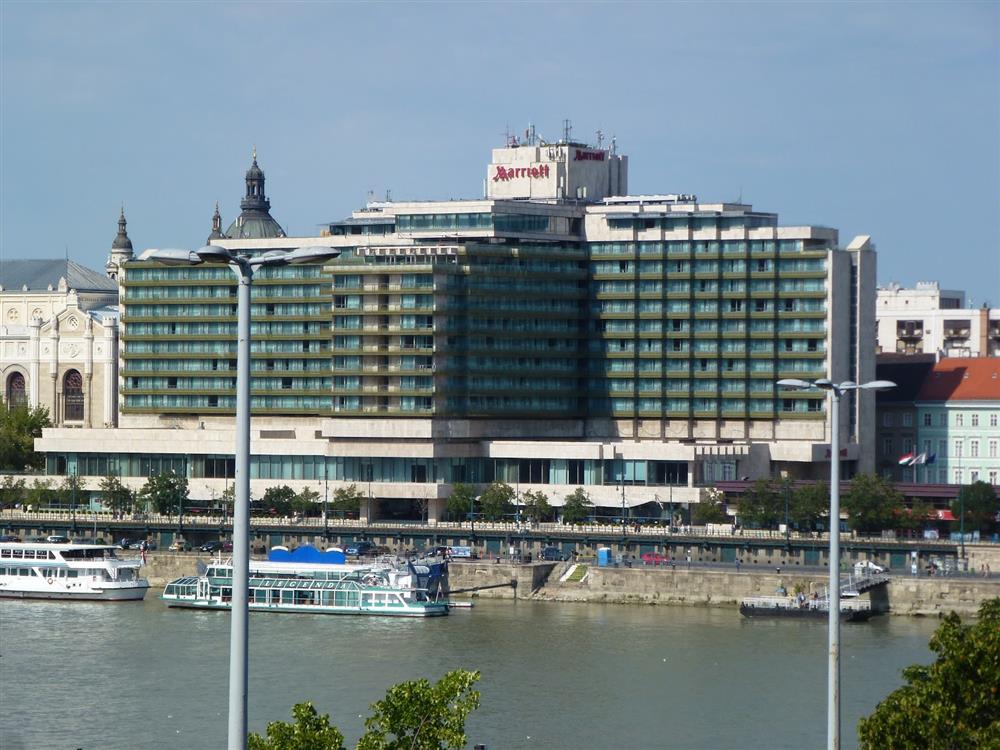 The Marriott in Budapest

We would have loved to stay in the Marriott in Budapest as well.  However, the IBIS was such a real bargain it was hard to let it pass.  Who would have thought hotel accommodations were going to be much cheaper in Europe than in the US even with the weak US dollar. 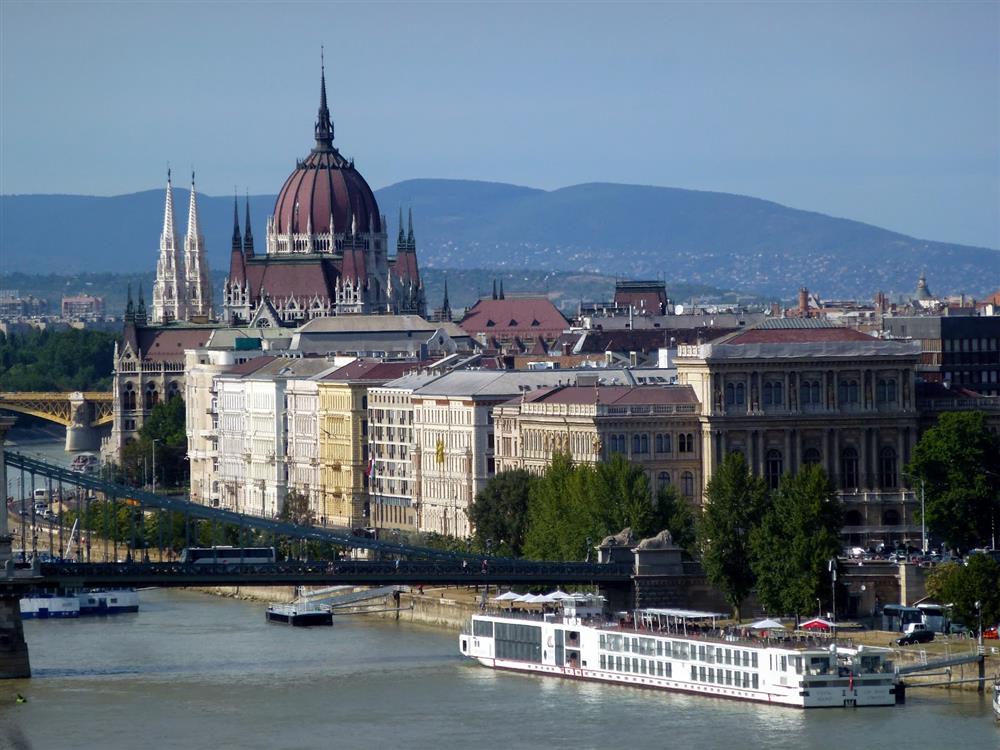 Farther down from the Intercontinental Hotel was an obstructed view of the famous Parliament Building. A Viking Cruise ship can be seen on the foreground

Upon our descent from Gellert Hill, we passed by a park where a statue of the Austrian Queen, more popularly known as Sisi, was erected by the Hungarians to a royalty who loved Hungary and its people so very much. 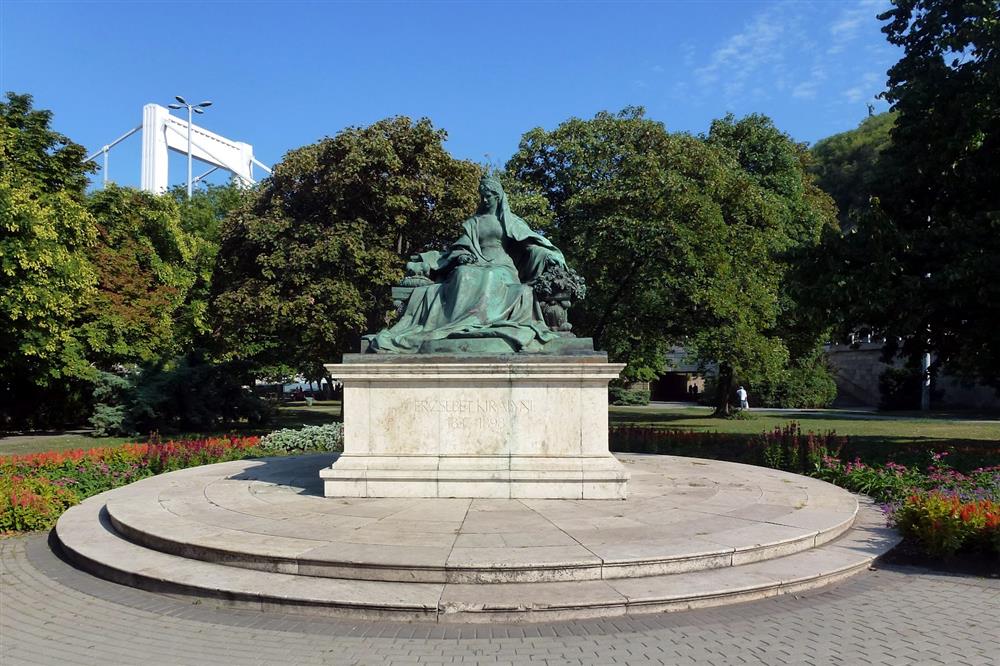 Close, closer, and the closest view of Sisi, the Austrian Queen 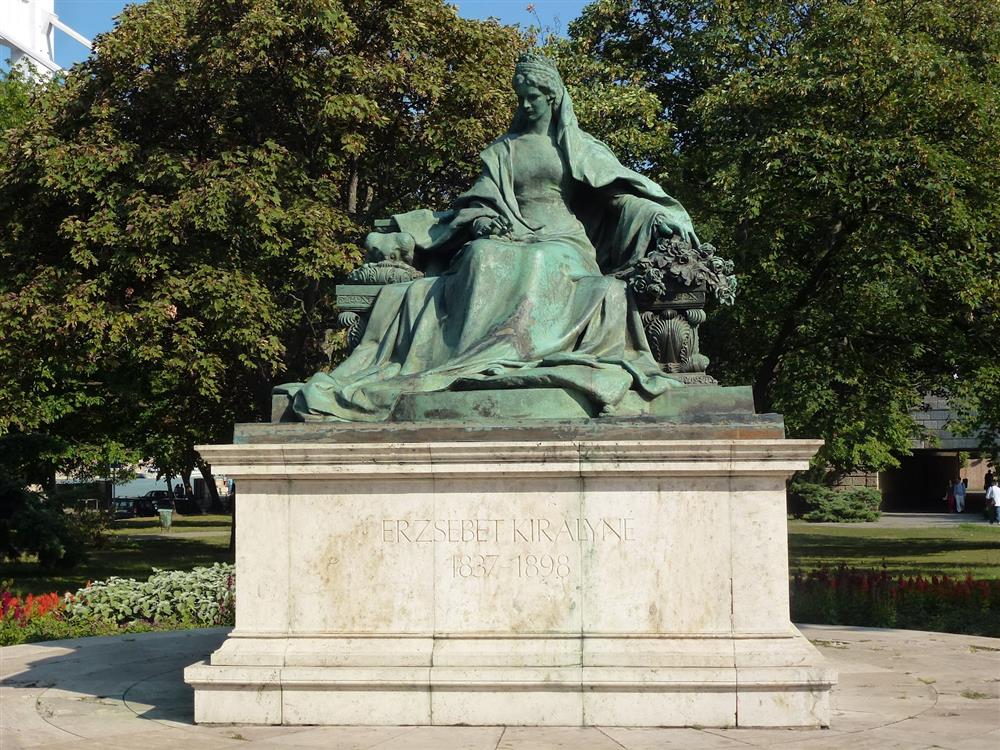 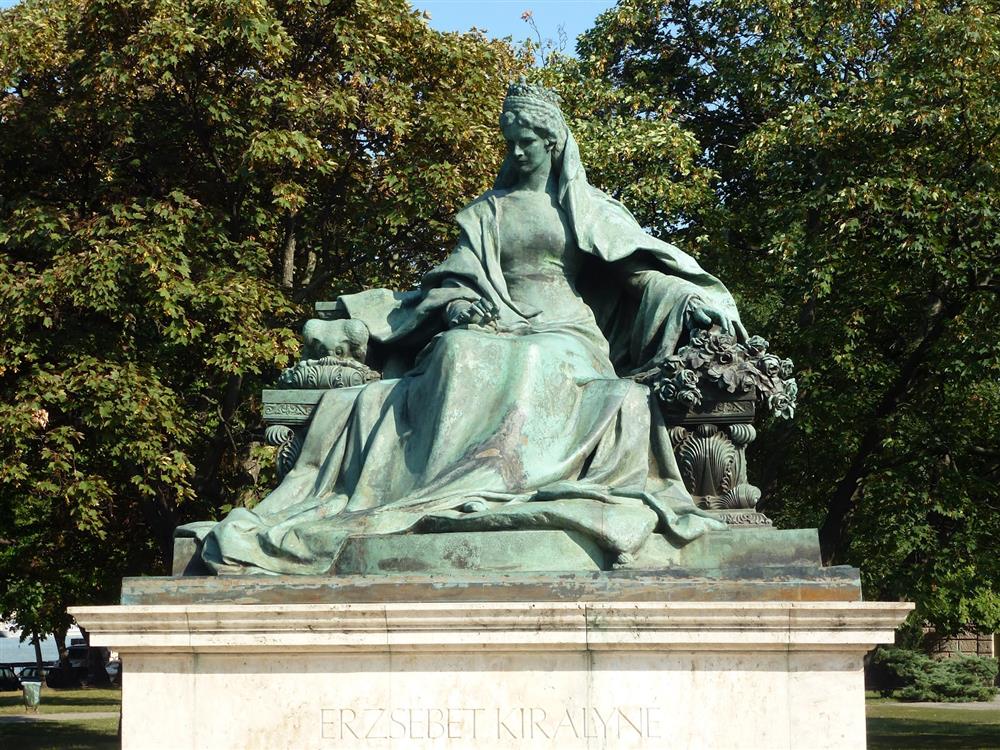 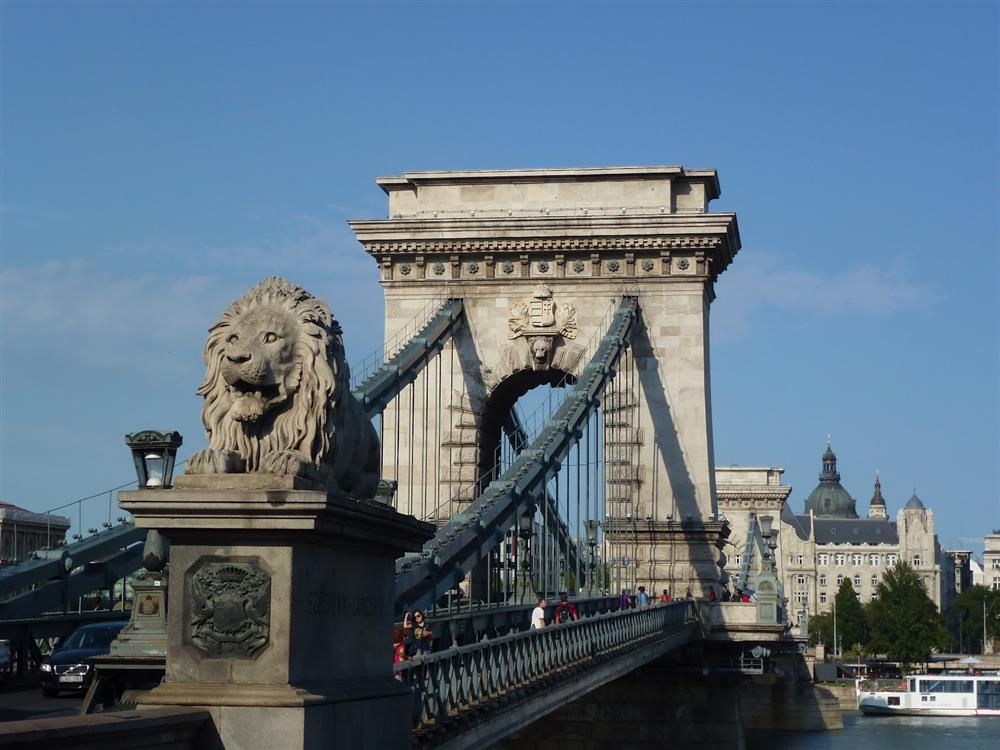 The famous Chain Bridge, the most famous of all bridges crossing the River Danube in Budapest, was truly a sight to behold. It was big and imposing especially with the lion statues on both ends 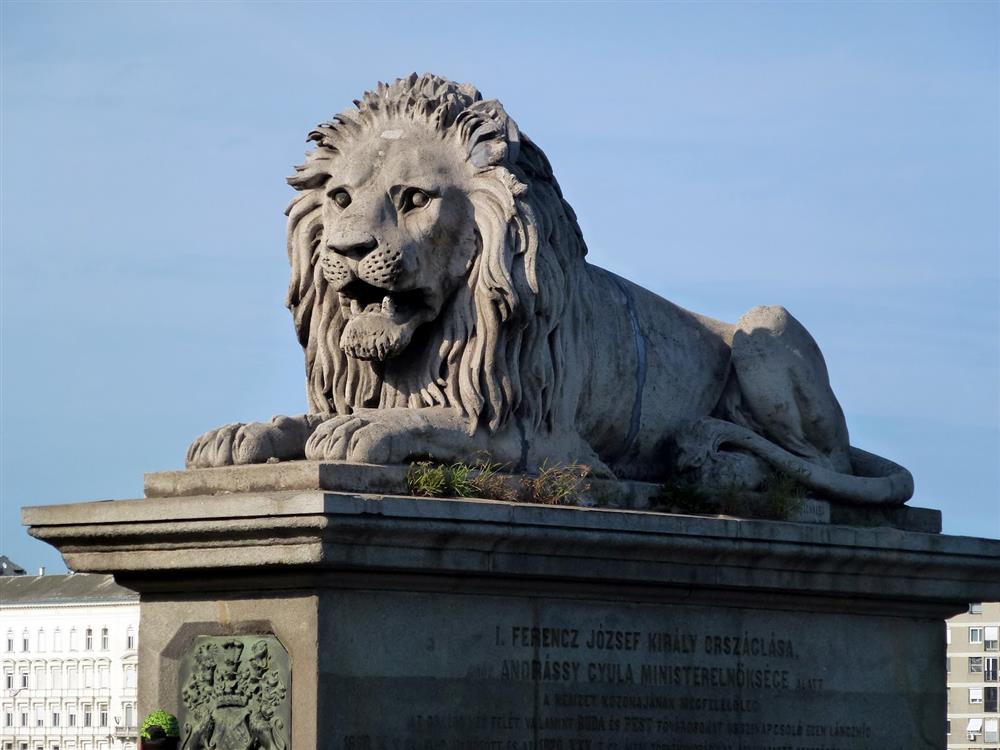 A close up view of the lion guarding the Chain Bridge 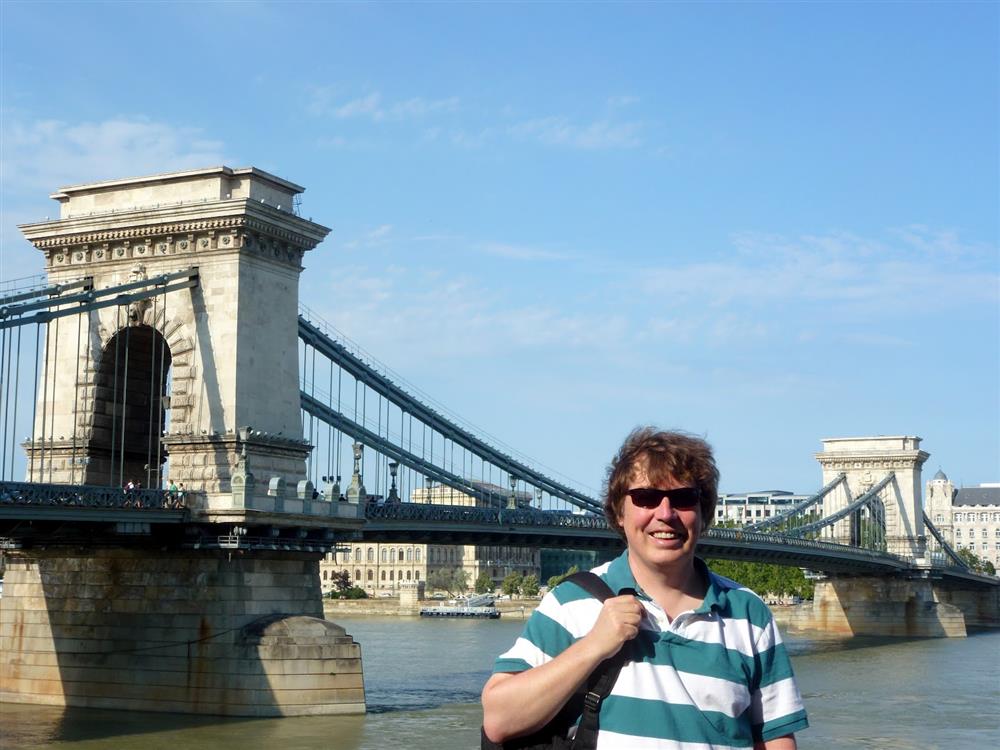 Marc in front of the Chain Bridge in downtown Budapest 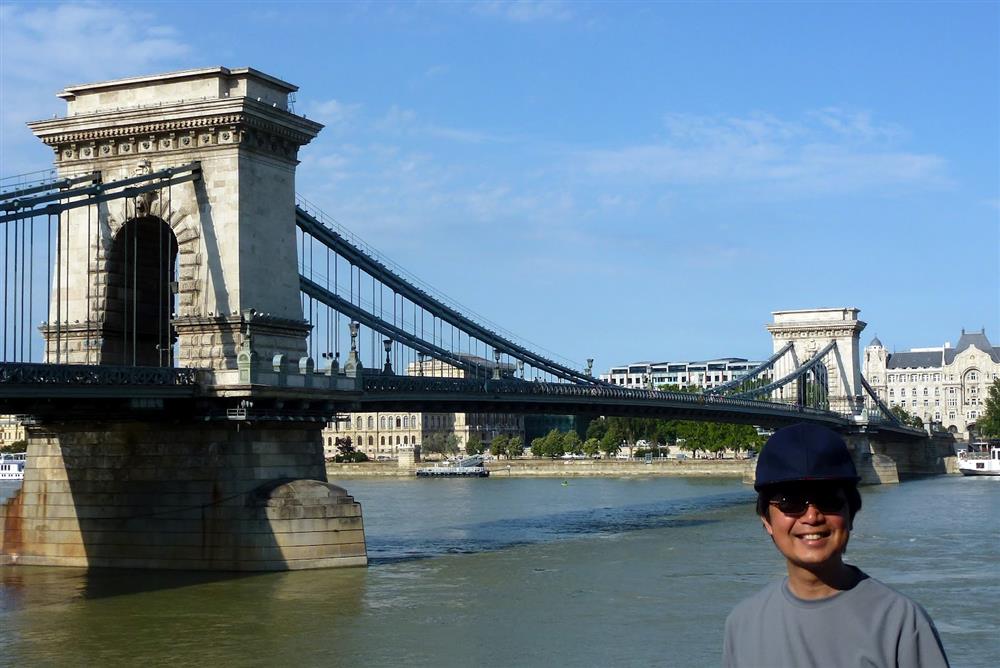 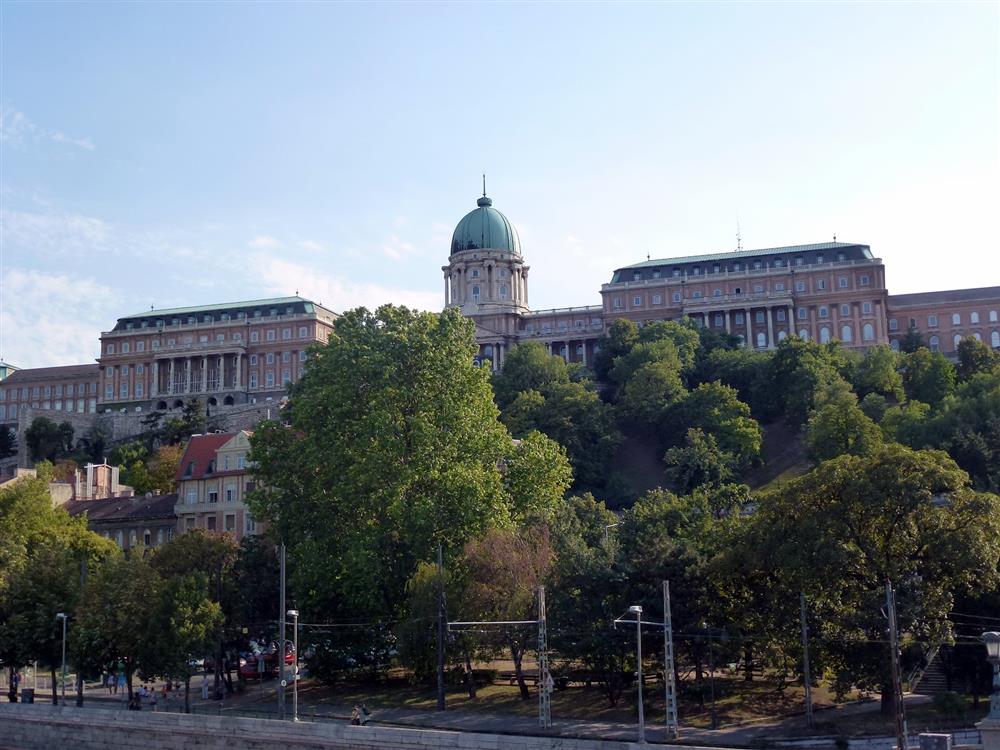 A view of the Buda Castle from the Chain Bridge

We didn't have time to go inside the Buda Castle but we passed by it so many times when we were in Budapest.  So many times, I honestly lost count how many.   It is so imposing and huge it could literally be seen from the opposite side of the Danube.  One even gets a beautiful framed view of it from the lobby of the Intercontinental Hotel. We did walk on its grounds on our very last day in Hungary.  More about it on a later entry. 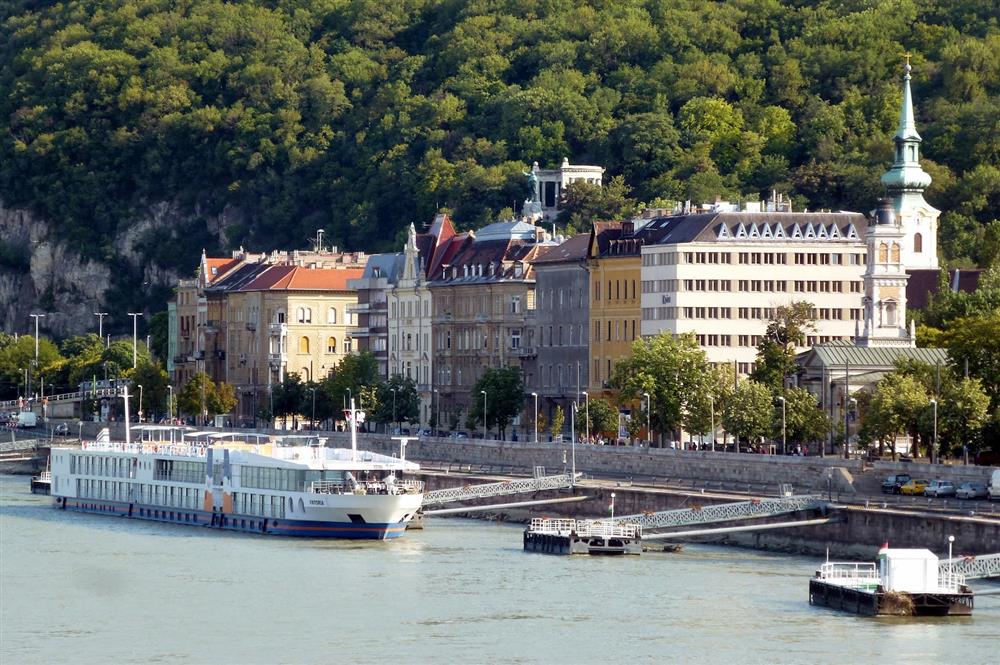 I just loved how beautiful everything looked by the Danube in Budapest.

To be honest, up to now I can't believe I have already traveled to Eastern Europe.  For years I resisted traveling back to Europe after visiting around twenty countries there given the fact that everything started looking the same to me especially in the northern part of the continent.  Visiting the eastern part of Europe definitely opened my eyes to new and wonderful places so different from the west.

After climbing up Gellert Hill, we continued walking by the Danube.  We saw many historical buildings but didn't know what they were nor their names.  One monument we passed by was by YBL Miklos who turned out to be Hungary's most prominent architect. 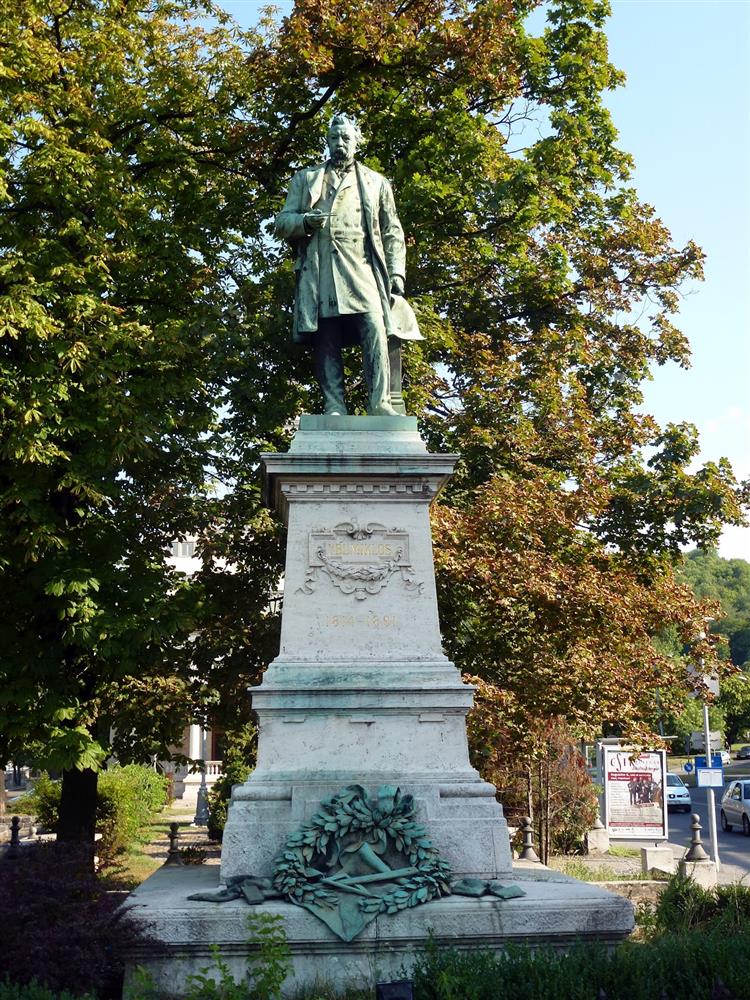 The Monument in honor of YBL Miklos, Hungary's most prominent architect and builder of the State Opera House 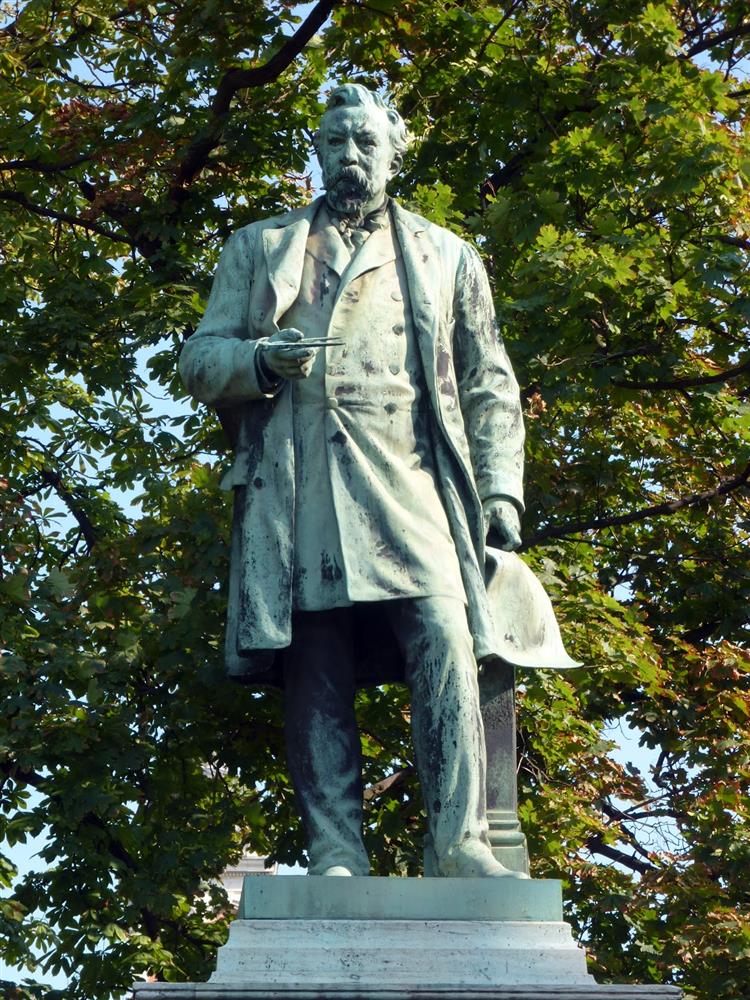 A closer look at YBL Miklos, the man behind the State Opera in Budapest 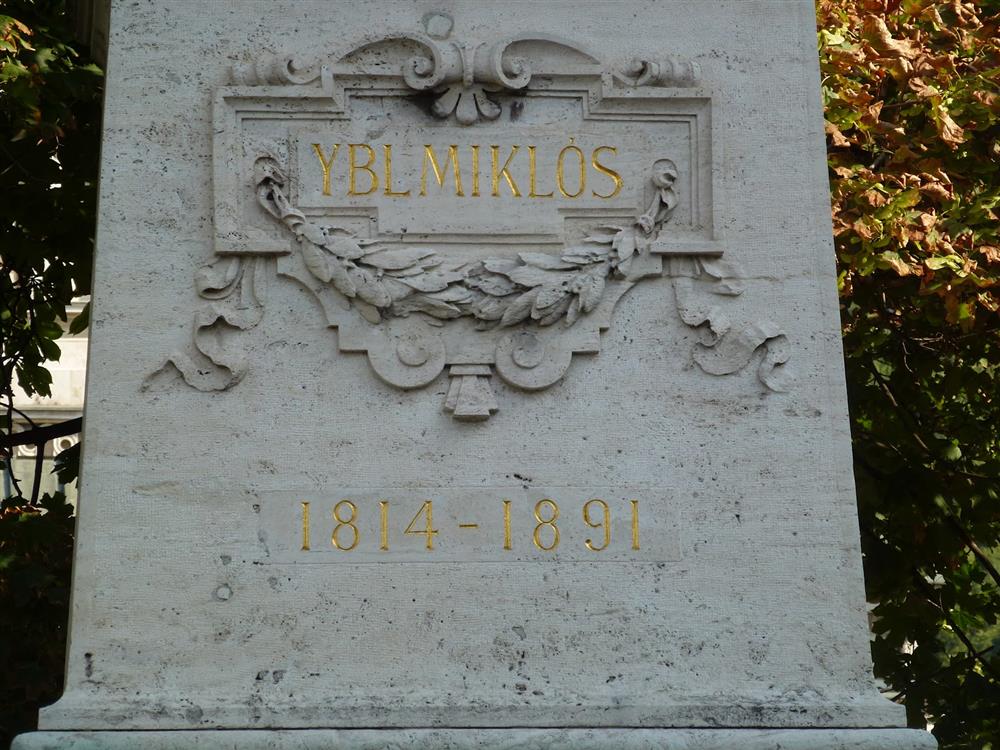 Thanks to the names engraved on the base of many monuments, I am able to do a bit of research on these individuals paid homage to and honored by the locals.