Our visit to Carcassone reminded me of Avila, Spain. Both cities are surrounded by walls. Anyway, I found Carcassone to be very pretty. By now, you must be tired of me describing each city and town we visited in France to be so. But that is the plain truth. We had one whole afternoon to explore and it was more than sufficient to walk, discover and explore. We were told that Carcassone was close to the border with Spain. I looked it up in the net and sure enough, if one were to travel from Carcassone to Barcelona, the trip would take from 1.5 to 3 hours depending on car speed. A view of Carcassone from the freeway we were on 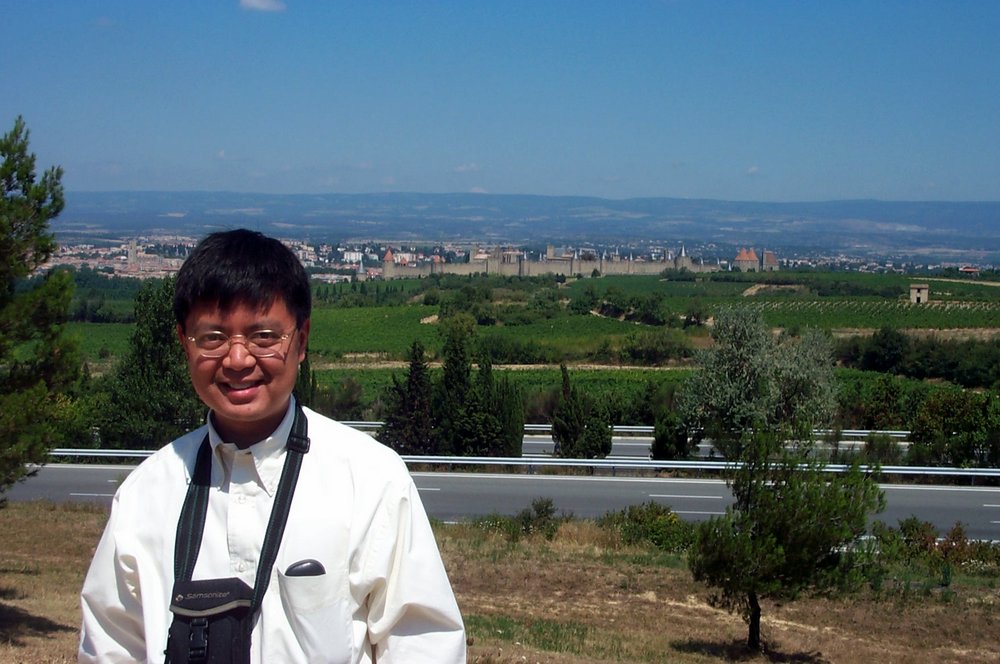 Me in Carcassone. Is that Spain way beyond the city walls?

A medieval city, Carcassone is one UNESCO World Heritage site. It has 52 towers and two concentric walls which form some two miles of battlements. It likewise has a castle and a basilica within its walls. 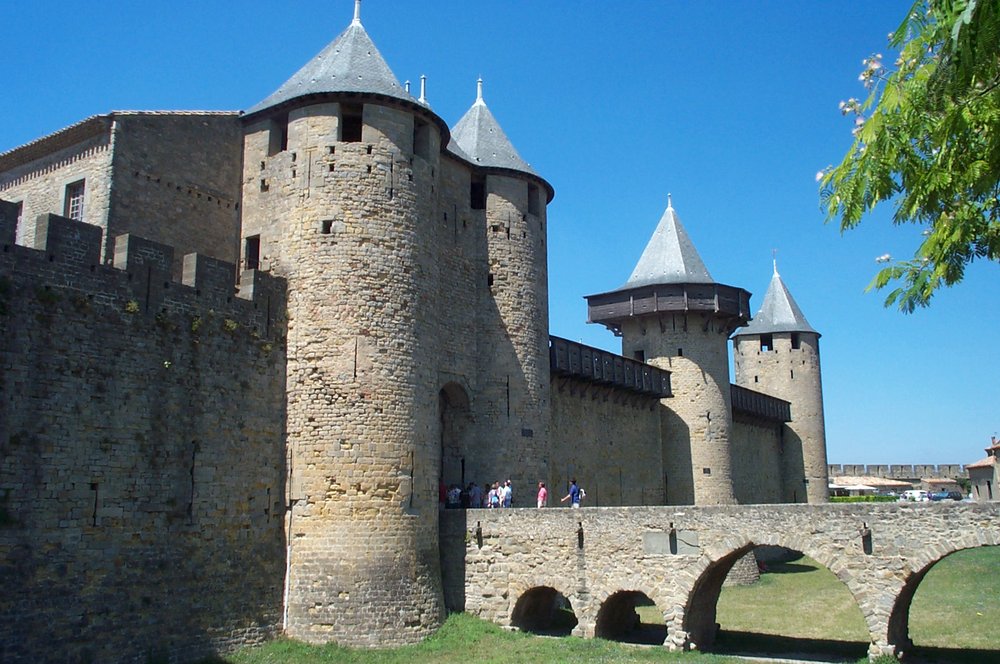 The main entrance to the walled city of Carcassone 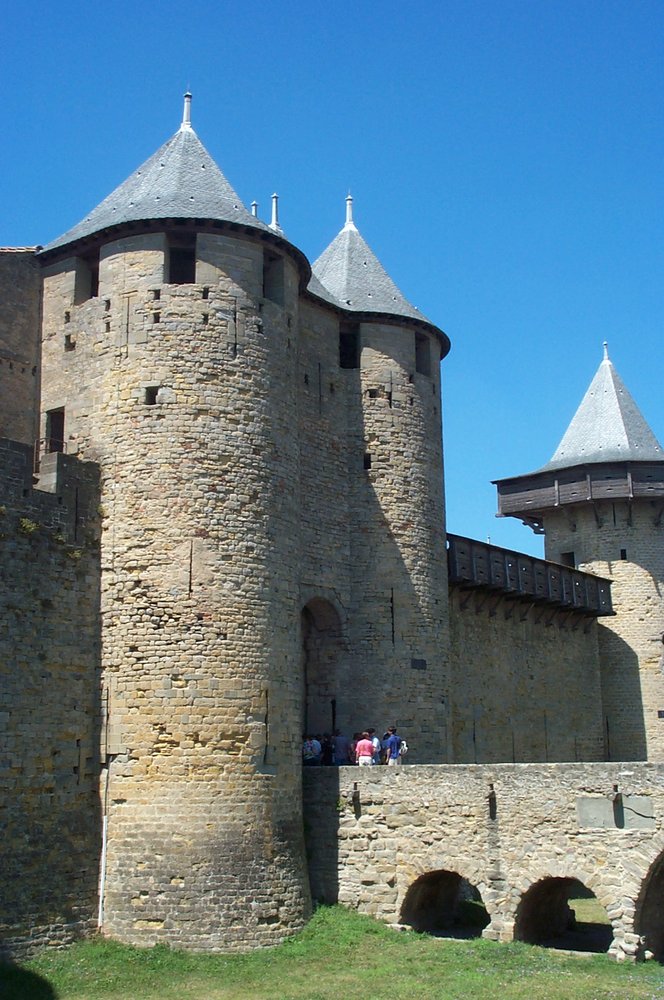 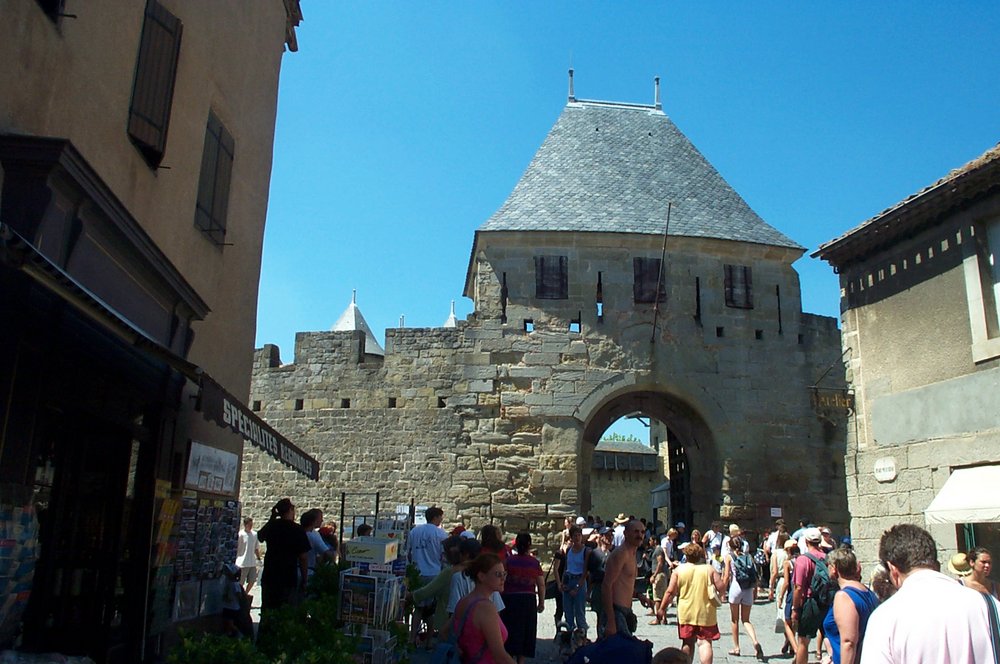 At the time of our visit, there were tourists galore in the area. It was here where we bought some local sweets called the canalet and tried out the dish called casoullet. Both, I must say, were TERRIFIC!

Time was what we had here. Enough for us to go to a restaurant for a sit down meal. We followed our guide's suggestion and ordered the casoullet, the area's main dish. It was fantastic! We loved it so much, I remember ordering it in a French restaurant in San Francisco when we returned. 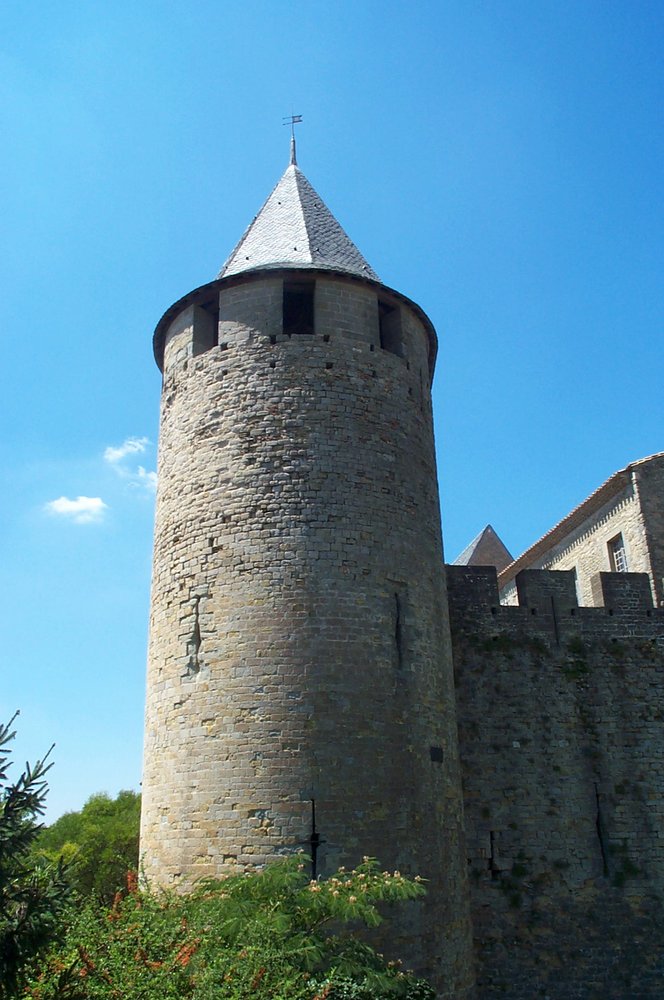 One of the many towers of the walled city 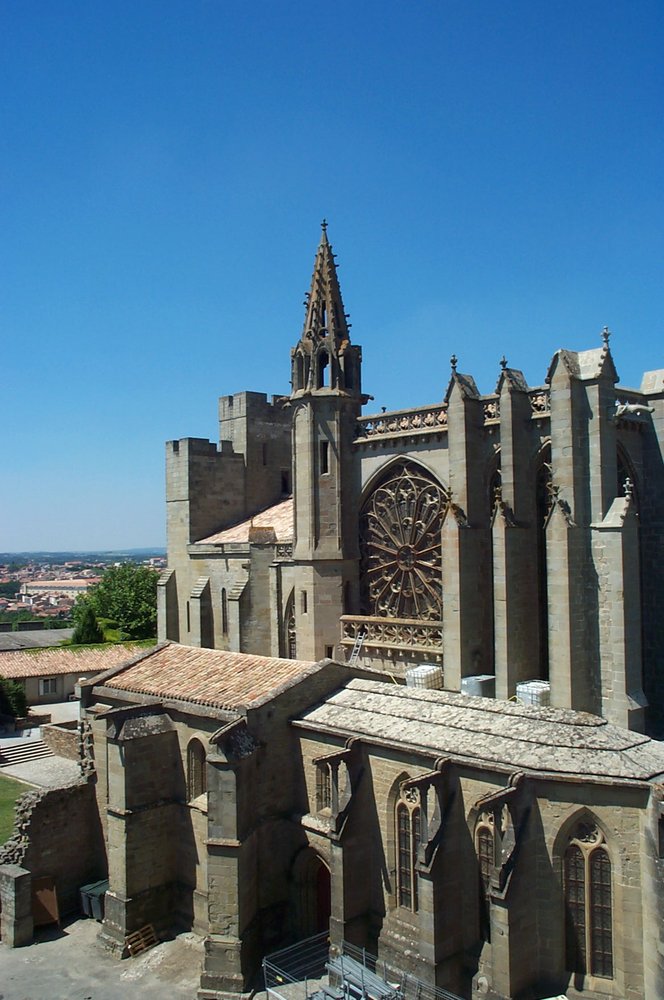 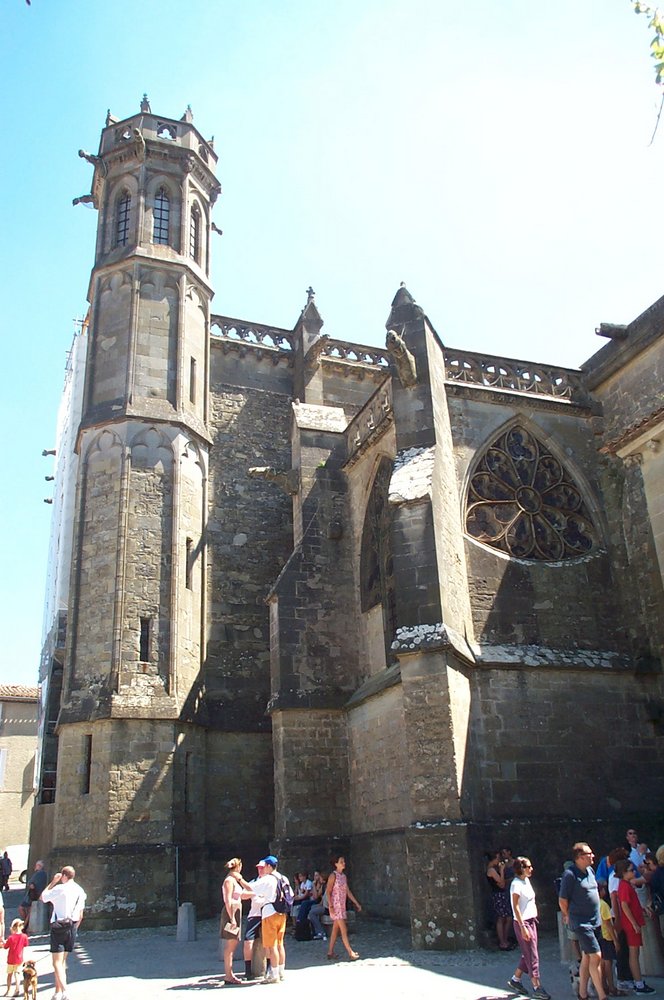 Another view of Cathedral Saint Nazare 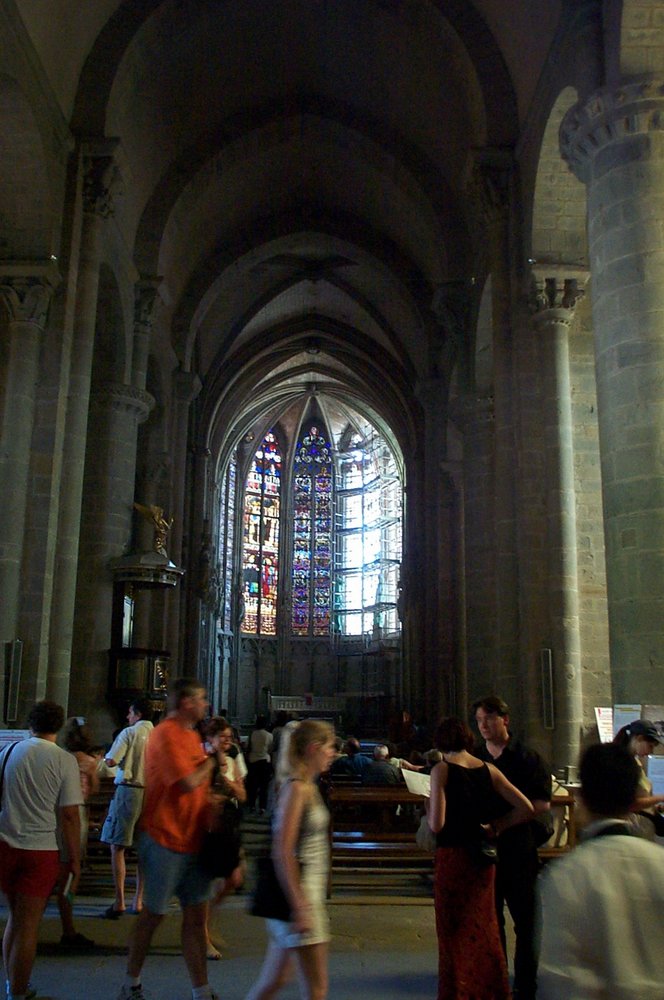 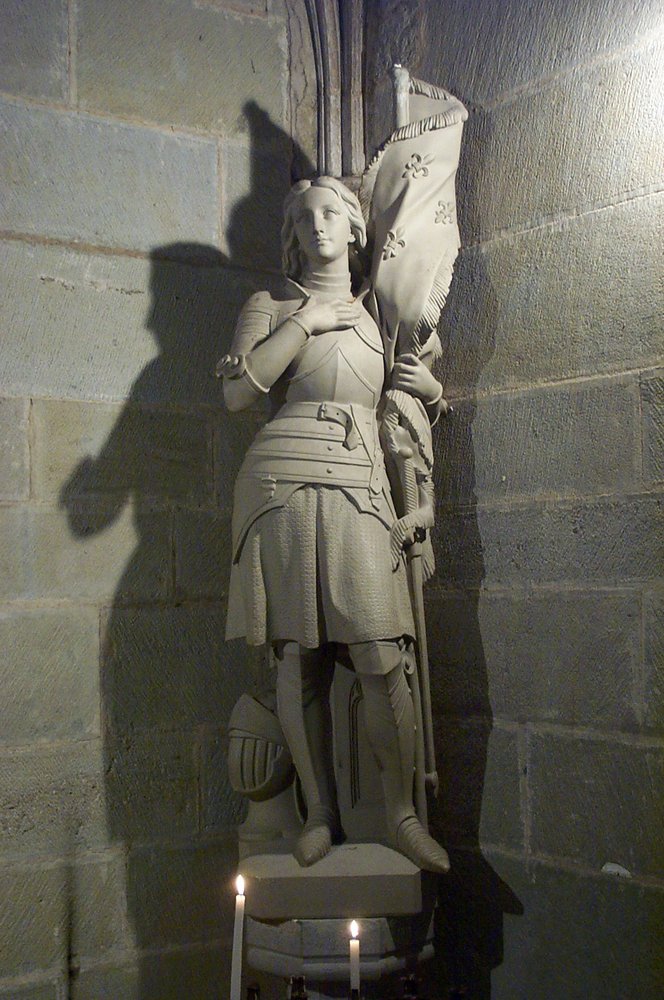 A religious statue inside the cathedral 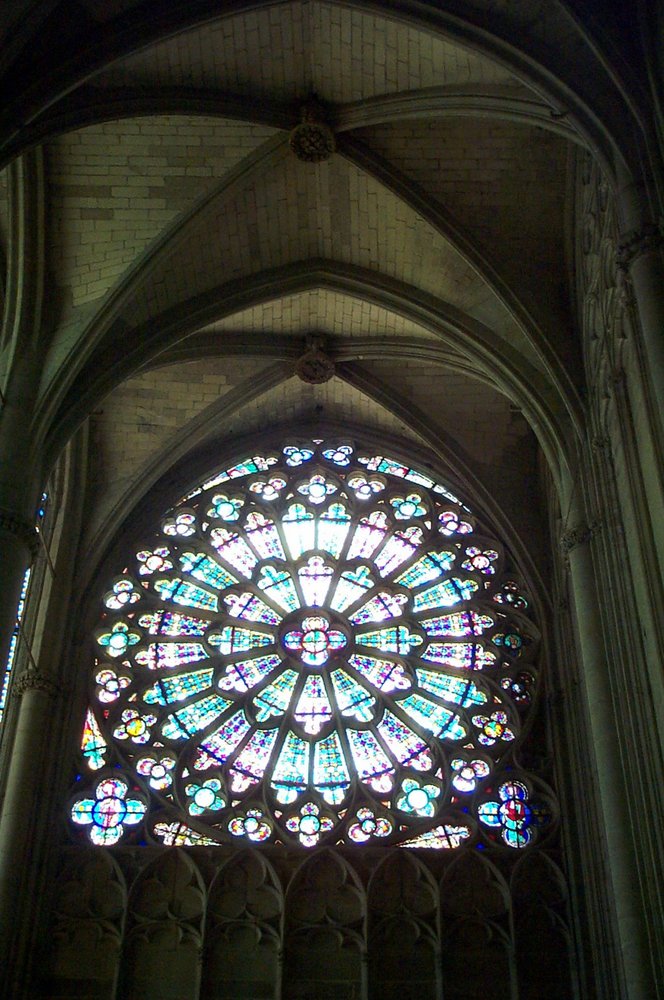 One of the stained glass windows inside the cathedral

It was hard to believe the sheer number of churches and cathedrals in France. Goodness, there was a Cathedral of Notre Dame in each city almost. Per my understanding, the French are Catholics but not practicing. Perhaps, these churches in France are empty on Sundays just like their Spanish counterparts. I remember going to church in Spain on Sundays and seeing only senior citizens. 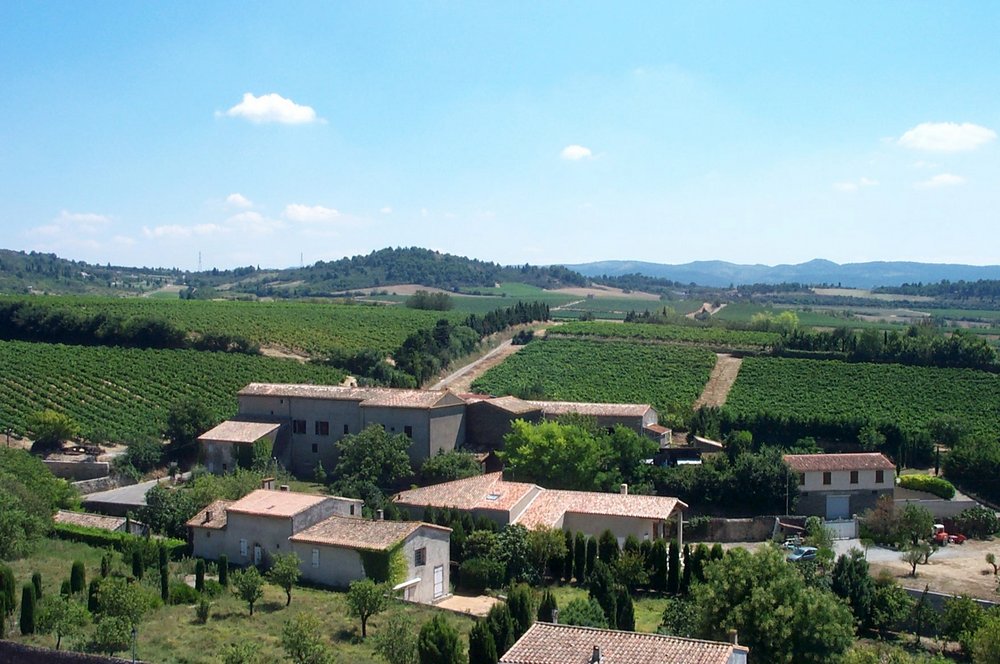 Marc and I spent a lot of time just roaming the section within the walls. Some were packed with visitors while others totally desolate. 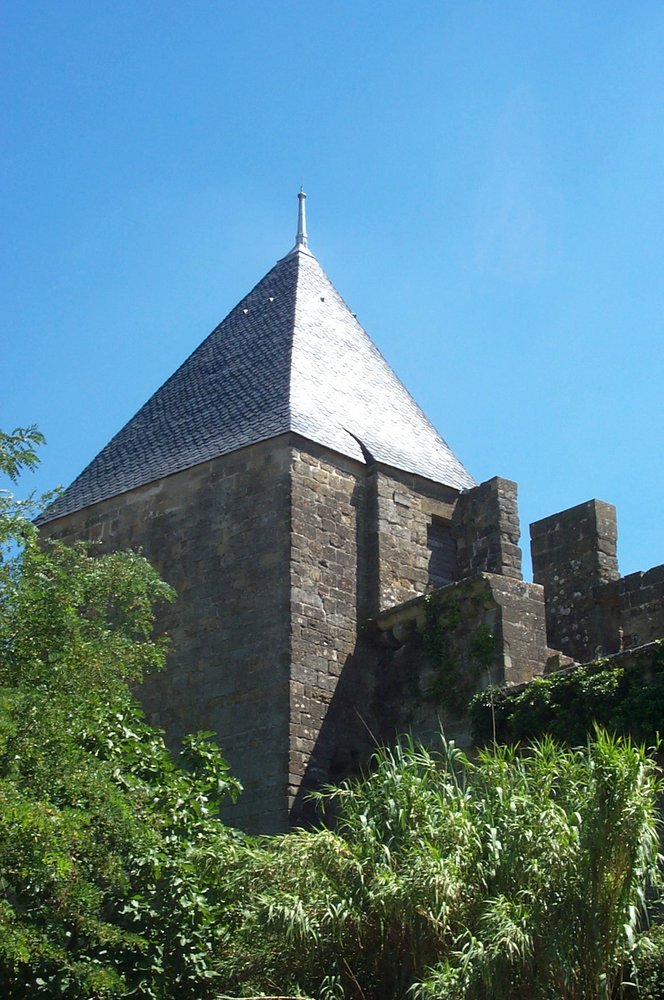 Another tower with a pyramid top and quadrilateral base 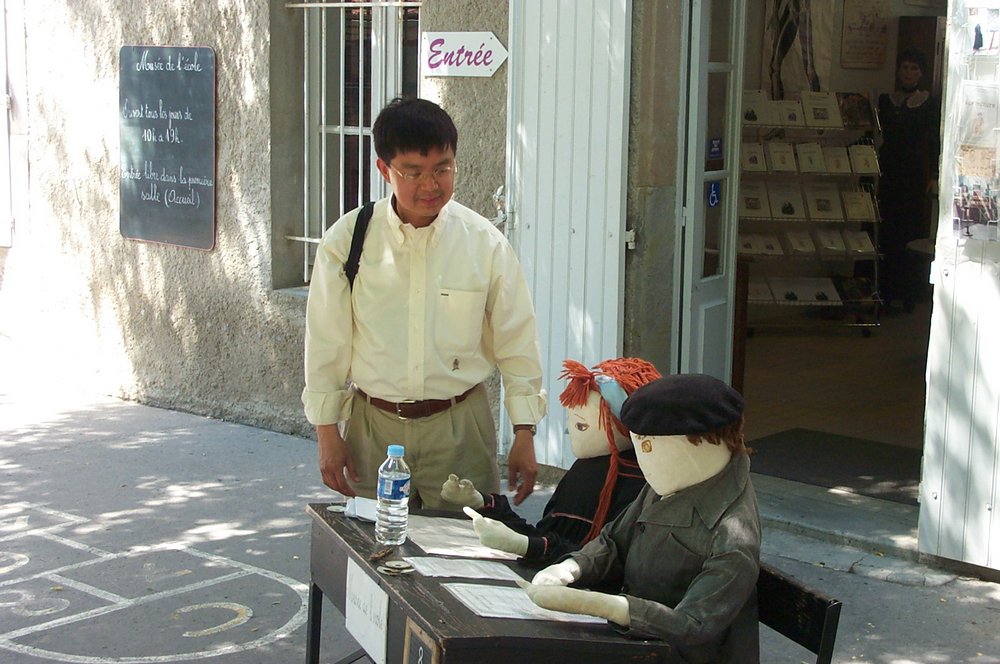 In front of a local school turned museum within the walled city. Here I am looking at some stuffed dolls seated behind a desk. 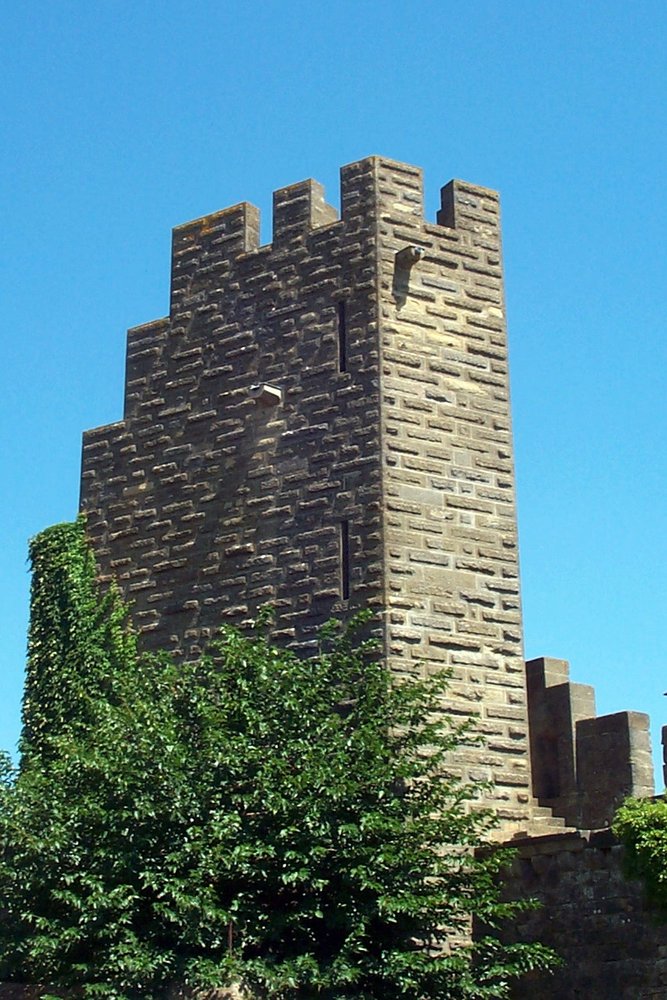 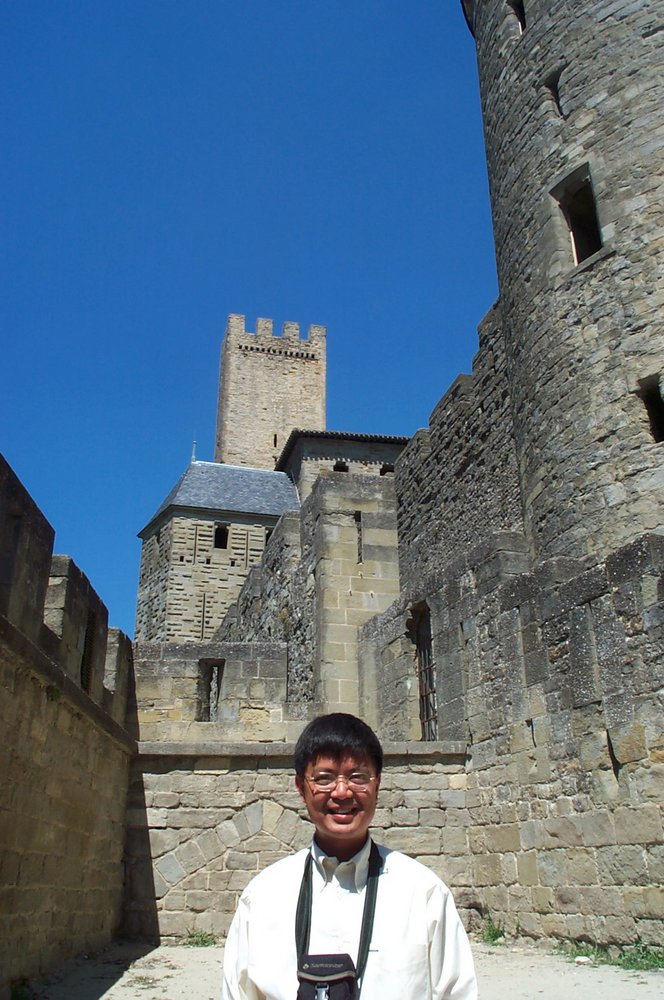 In a quiet corner within the walled city of Carcassone 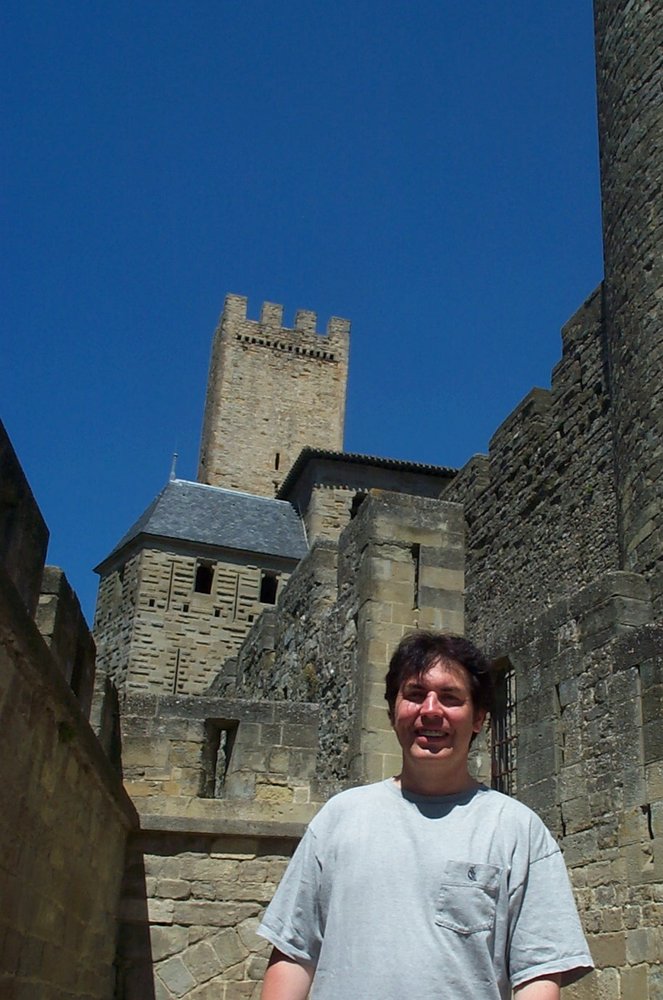 Marc inside the walled city of Carcassone Hello! Can you see me? 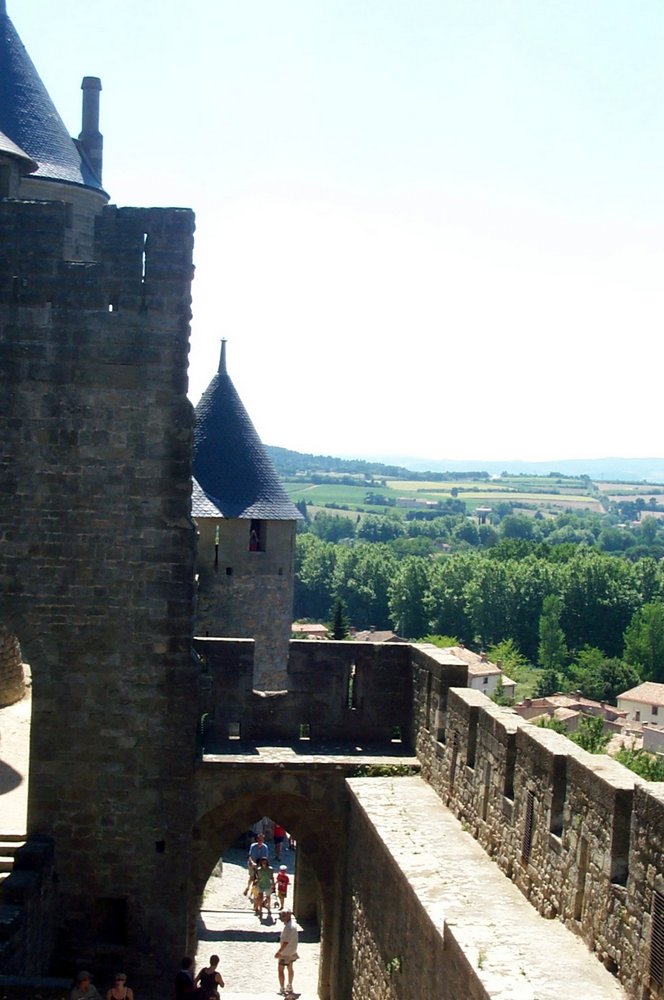 As I mentioned earlier, the place was jampacked with visitors. Their presence though did not dampen our visit. In fact, I liked the crowds and they made the palce very lively and fun to be in. 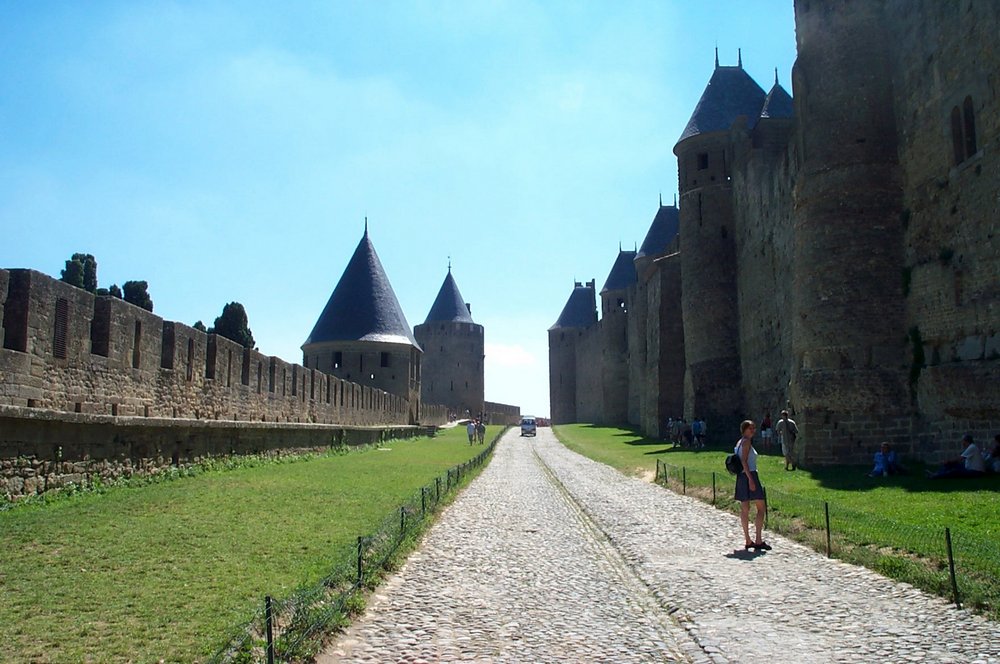 A scene in Carcassone The moat right outside the walls 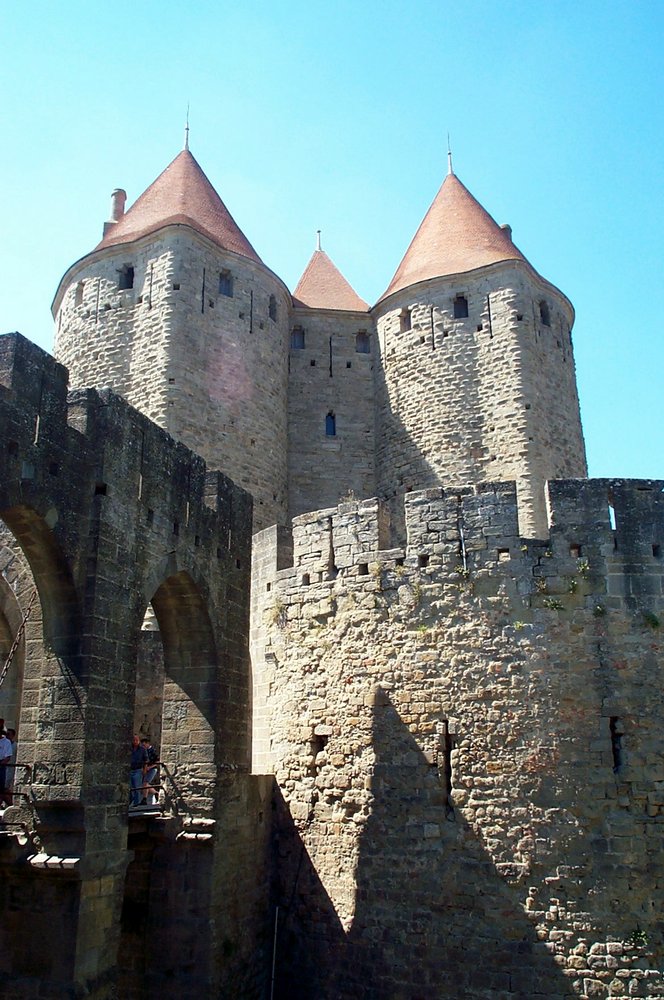 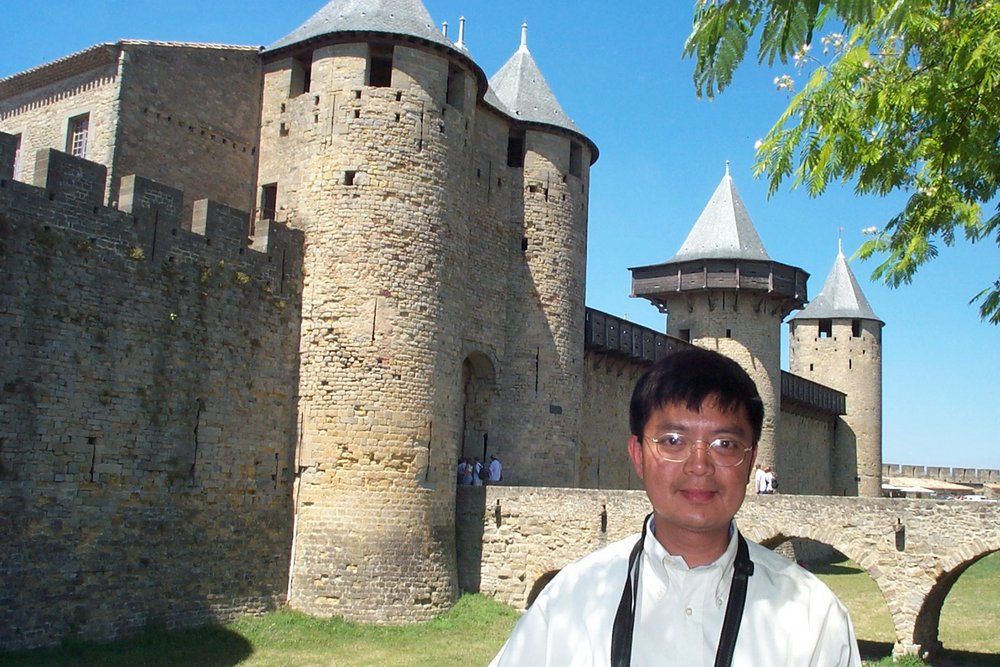